You are here: Home / NHL / Coyotes / Clifford and Westgarth Preparing to Get (Biz) Nasty? 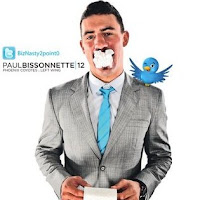 With the Phoenix Coyotes in town tonight to take on the Kings it’s worth re-setting a story from the last time these two teams got together.

If you’re not on twitter, you many not even know that one of the most popular hockey players in North America has scored only one goal in 37 games this season.

He’s played in less than 100 NHL games and averages fewer than five minutes a night for the Coyotes, yet he had more All Star Game votes this year than Shane Doan, Justin Williams and Dustin Brown.

Paul Bissonnette, better known as BizNasty2point0, is all the rage right now. He talks plenty of puck, but also tweets non-hockey takes like “4Loco is Charlie Sheen in a can. Of course its back.”

He even pokes fun at himself with tweets like “In case you folks are wondering I have a no movement clause, but its from the middle of the bench.”

Prior to the Kings-Coyotes home-and-home series in late January BizNasty and I did the first ever MayorsManor twinterview.

His key comments had to do with Kevin Westgarth and Kyle Clifford, who then provided their responses as well. Take a look…

MM: The Kings have three scrappers right now (Westgarth, Clifford and Wayne Simmonds). You’ve faced off with Westgarth twice, including once in the AHL, and Clifford during the pre-season. What are your thoughts on those guys?

BizNasty: Clifford jumped me in pre-season, then I asked him to fight last game like a man, (he) wouldn’t. Standard. Heard he jumped guys in junior a lot. As for Westgarth, tough customer. Clifford is tough too, he will get stronger too, and he can play.

[note: Check the video here to see if you think it supports his comments on the first incident.]

And the Kings answer back…

MM: Bissonnette says you jumped him in the pre-season…

Clifford: It’s great to say that’s kinda what happened. I grabbed him, he’s got a reputation as a fighter around the league. So, it’s pre-season, you want to show what you can do. I guess he didn’t want to drop them at the time. So, I just kept swinging away.

MM: He says he asked you to fight during the (Dec. 29th) game and you declined…

Clifford: Yeah. He’s a heavyweight fighter. I’ll leave that up to Westie, that’s why we have him out here. I’m more of a middleweight. I can score goals and put points on the board. He (Bissonnette) is just out there to fight. That’s his job. I’ll go with guys like (BJ) Crombeen – guys that can play the game and fight as well. He can fight the heavyweights, that’s his role and that’s why he’s on that team (Phoenix).

MM: Walk us through a situation like that. When you decline, do you let Westgarth know that a guy is chirping out there and probably willing to go?

Clifford: Westie just kinda takes charge usually. Before a game he knows who’s who and who their heavies are. He knows who is more my (weight) class. We talk about it before games. There’s guys that won’t fight him and there’s guys that I won’t fight. We know our jobs. We know who we have to fight and with Simmer (Wayne Simmonds) too – between the three of us we can take care of it from all ends, middleweights and heavyweights.

And what did Westgarth make of all this…

Westgarth: I would probably agree with the video. Biz can think whatever he wants. I think a lot of the fighters, a lot of guys in the role, are inclined to think they won every fight – I know I am. I’ll leave it at that I guess. But, Clifford’s a tough kid. So, he better watch out.

MM: Kyle says he declined his offer for a rematch (Dec 29, 2010) and he’ll leave that up to you as the resident heavyweight…

Westgarth: Absolutely. That’s one of the reasons I’m here. Cliffy can obviously take care of himself against a guy like Biz. But, that’s what I’m here for too and to make sure that if we’re in a tilt, that we’re going to win it for sure. That’s the way I like to look at it.

As luck would have it, Bissonnette was scratched from the first game and Westgarth from the second game of the home-and-home contests. So, nothing happened between those two.

The Colonel and Biz Nasty were on the ice several times together in the last game.  However, nothing much happened.

But, things may have been back-burnered only temporarily – this situation is probably far from over.

Who knows, perhaps Bissonnette will get that rematch with Clifford he’s been looking for tonight…and then tweet about it after the game.