You are here: Home / comments / LA vs Phoenix Preview – TwInterview with Biz Nasty 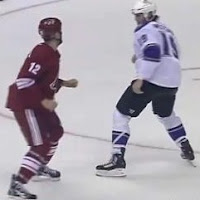 In hockey circles you have your black aces, plumbers, pipefitters, fillers, bridges and so on.

There’s also a whole different type of role player. This guy has played in less than 100 NHL career games, has scored three goals total over three seasons and averages only five minutes of ice time a night for the Phoenix Coyotes.

Yet, he had more All Star Game votes this year than Matt Duchene (Colorado), John Tavares (NY Islanders) and Dustin Brown.

If Howard Stern is the King of All Media, then Paul Bissonnette is certainly the Champ of Twitter (sorry Ashton Kutcher, you lose).

Tweeps know all about @BizNasty2point0. However, if you’re not connected to the twitterverse yet, you’re missing his takes on PT Cruisers, homeless people, hot girls, scrabble games with teammates, attempted translations of Ilya Bryzgalov quotes and shopping tips like this one – “Just bought the beats by Dr. Dre Pro. These things make William Hung sound like Pavarotti.” Followed by “These headphones are like the shake weight on crack.”

As the master of 140 word or less quotes, it was only right that the first ever MayorsManor twinterview was with Biz Nasty himself.

MM: You’ve introduced the masses to many words on twitter – i.e. twigs (hockey sticks), apples (assists) and twooping (you don’t want to know!). What word have you used that confused people most?

PB: None, cause I’ll usually explain them via twitter.

MM: You recently noted you have a new roommate on the road (Chris Summers). Why the change and what do you think about it so far?

PB: Because (David) Schlemko is out with a conci (concussion) and not on the road. So I have the call up.

MM: How are things going with the new clothing line and what are some future plans?

PB: Sauce Hockey is expanding. We have some (more) stuff coming out soon.

[note: If you’re thinking those are pretty bland answers and were hoping for something good, hang on…he’s about to bring the heat…]
MM: The Kings have three scrappers right now (Kevin Westgarth, Kyle Clifford and Wayne Simmonds). You’ve faced off with Westgarth twice, including once in the AHL, and Clifford during the pre-season.  What are your thoughts on those guys?

PB: Clifford jumped me in pre season, then I asked him to fight last game like a man, (he) wouldn’t. Standard. Heard he jumped guys in junior a lot. As for Westgarth, tough customer. Clifford is tough too, he will get stronger too, and he can play.

There was supposed to be a fifth question about his playing time in juniors (Owen Sound0 with the Kings’ Brad Richardson and Ducks’ Bobby Ryan. I haven’t heard back on that one. Technical difficulties I guess. So, we’ll save that for a different day.

Tonight the Kings and Coyotes will meet for the third time this season. Perhaps Bissonnette will get that rematch with Clifford he’s been looking for.

If we’re lucky, he’ll even tweet about it after the game.

Interview with Bobby Ryan – talks about his friendship with Kings’ players