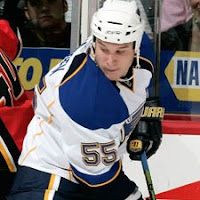 Cam Janssen is in his sixth NHL season, the last four with the St. Louis Blues. He’s posted only two goals while racking up 589 penalty minutes in 219 games. It’s what you call ‘knowing your role.’

In the interview below he helps us preview tonight’s Kings – Blues game. We talk about LA’s tough guys, playing for his hometown team, scouting NHL enforcers, BizNasty’s tweets, Keith Tkachuk’s retirement, adding Jaroslav Halak…and he even gives a prediction for the game.

MM: Although the Blues didn’t make the playoffs last year and the Kings did, you guys took the season series from LA 3-1. Tonight will be the first match-up this season. What will be the keys to the game?

CJ: They’re a good young, skilled team. They’re playing good solid hockey right now and they’re one of the best teams in the Western Conference. We have a lot of injuries right now. So, we have to come out and immediately get our feet going on our forecheck.  Also, the first five strikes back are so key for us. Catching up with an odd man rush or what could be an odd man rush is important, knowing that we don’t have the skill or power we’re used to because of our injuries. So, we need to be effective with our details – that’s skating hard, being in the right position and back checking with a purpose. The Kings offense is good. So, if we don’t do that, they’re going to take advantage of us.

Over the summer there were a few significant changes to the Blues’ line-up. What were your first thoughts when you heard goaltender Jaroslav Halak was coming to St. Louis?

Not only was I excited, I was extremely surprised. For a kid like that to come in and get Montreal so far in the playoffs – with a team that wasn’t all that good in front of him… I’m not taking anything away from the Montreal Canadiens, they’re a solid bunch. But, they surprised a lot of people and he stood on his head. It wasn’t a fluky thing either. You cant win playoff series’ like that and have it be a fluke. He was great, especially against Washington. To excel with such a big spotlight that was on him there, it just shows he’s a hell of a goaltender and boy, to give him up like that – it was a great move by (Blues GM) Doug Armstrong, to get him.  We needed that. We haven’t had a goaltender with that type of status in a while.

On the flip side, what has losing the veteran presence of Keith Tkachuk (to retirement) meant to the team this year?

Big Walt (his nickname) was a hell of a hockey player. He meant a lot to us on and off the ice. In the locker room, when we need something to be done – like if the team agreed we were tired, he was the guy we’d go to and say ‘Hey Walt, do you think we can get today off?’ He just had that pull because of his status. He was so well respected. I think that goes a long way. Yeah, he was great on the ice, but he was getting old. He looked old too if you ever saw him. (he laughs) We miss his presence in the locker room more than anything though. He kept us motivated and kept us going. He was basically a player coach at the end of his career. He had a lot of say in the dressing room and in the organization. So, that was a tough loss for us.

You were born in St. Louis, so you’re playing in front of friends and family on a regular basis. Does that add any extra pressure to you or does it somehow relax you more?

It definitely adds a lot pressure. I can’t even go to the gas station without having to talk about what happened. If you lose a fight, people are asking you why that happened. There’s a lot of pressure. But, I’ll tell you what, I’m living it up. I think I have the best case scenario going. I’m right next door to my parents. If I run out of milk, I just go next door and take all their food. I have friends and family that completely support me 100% on everything, even when I have a bad game or I’m sitting out games. There’s pressure though. You have people barking in your ear everywhere you go. You’re in a bubble in St. Louis and everybody knows who you are. But, I like that attention. There’s a lot of good and there’s a lot of bad. But, the good overpowers the bad – no doubt about it.

It’s the coolest thing for anybody to go through, playing in your home town. Growing up, watching the St. Louis Blues your whole life, just being part of the organization. I remember back in the day when I used to go to the Blues games with my mom and dad and brother. We’d be cheering them on and I was always thinking ‘Boy, that would be cool to play in the NHL.’ So to be the first guy ever to be from St. Louis and play for the Blues is just unbelievable.

You fought Paul Bissonnette last month in Phoenix. You’re on twitter and obviously so is he. Do you follow BizNasty and if so, what do you think of his tweets?

He’s a cool cat, I like him a lot. I’m on a short leash when it comes to twitter and apparently he’s not. I have to be careful what I say on there because I have a lot people reading and I don’t want to say the wrong thing if I’m fired up after a game or just say the wrong things in general. So, I’m pretty conservative with my tweets. I like the way he’s just himself on there. When I do interviews, that’s when I’m myself. I’d like to be myself more on twitter and say what’s on my mind, but you don’t want to say the wrong thing to cause any type of controversy. But, I love to follow what he says on there because a lot of the things he says he’s taken right out of my head too. As long as he puts it on there though and it’s not me, I guess I’m good to go.

Another guy you fought recently was John Scott of the Chicago Blackhawks. How would you rank him compared to some of the other heavyweights around the Western Conference right now?

Anybody that’s 6’8″ is going to have an advantage over most people and he’s been dusting guys off pretty good. I don’t think he’s lost a fight yet this year. He really takes advantage of that reach and his size. Just battling with somebody that big is extremely difficult. I have to deal with that one way or another when I fight guys, as most of the guys are bigger than I am. So, you have to have a strategy when you go into fights against guys 4-5 inches taller. And I do, I have my style and it seems to work. I’ve been doing this since I was 15 years old. When you go into these fights you have to be prepared. So, I definitely go onto YouTube and check out what they do. If he’s a new guy and I’ve never fought him before, I’ll study him to see what he does, if he’s a lefty or righty, etc. There’s a lot to this, it’s very complex. I don’t think some people appreciate it or understand that part of it. You’re not just going into these fights and throwing. You have to have a strategy, guys are too smart now.

Talk about that a little more, specifically as it relates to the Kings. Their three players most likely to end up in a scrap would be Kevin Westgarth, Kyle Clifford and Wayne Simmonds. You’ve never fought any of them. So, what type of scouting have you been doing?

I’ve seen them on HockeyFights.com and I’ve watched to see what they do. Kyle Clifford is a young kid and if he wants to go, we’re going to go. I know he’s pretty wild when he throws and I know what I’m going to do against him. A guy like Westgarth, he’s a big boy. He throws pretty heavy and I know he’s a righty. So, I have different strategies for those two guys. I’ll fight them in a totally different way and we’ll just go from there. Maybe the first fight we’ll kinda get used to each other and then when we play each other again later in the year it might change. We’ll see what works better.

Back to twitter to wrap things up. You’ve been involved in the Make My Day Monday initiative and have tweeted quite a bit about it. I saw you gave away four boxes of clothes this week. Talk about doing things off the ice to help out the community or just other people in general.

Being from St. Louis it’s not stop. I try to do as much as I can with the time available that I have. There’s always something you can do. Sometimes Monday’s are our days off, so the last thing you want to do is go run around and do stuff. You just want to sit on your couch and do nothing. You also have to realize you live in a fantasy world. Don’t get me wrong, I’ve worked my butt off for this – for where I am. So, it always feels good to give back. Sometimes my agent will text me and ask ‘Do you have anything for me today?’ I’ll say ‘Give me a couple hours’ and I’ll run up to the mall or I’ll go to the gas station. There’s always something you can do. There’s always some way to help somebody out. I try to do as much as I can. But, sometimes you have to force it. And when you do, hey – as long as you’re doing something, it’s a good thing. So, I think we’re doing a pretty good job with it overall.

All right, go out with a bang….give us a prediction for the game, what’s the final score going to be?

We’re going to beat the Kings 8-0. I’m going to get seven goals with an assist and a fight. So, Gordie Howe hat-trick with seven goals!

I’m not sure who was laughing louder throughout the conversation, him or me.

We’re just going to have to wait and see how his pre-game scouting methods work out against one of the Kings’ tough guys though. Should be interesting.