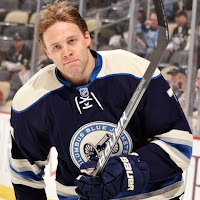 Tonight marks the fourth and final meeting between the Kings and Blue Jackets this season, but none of the prior games had the same feeling as this one. Of course, the big story line coming in surrounds Jeff Carter and Jack Johnson. However, Columbus can’t be taken lightly, they’ve won three in a row and the records for the two teams are pretty similar since February 1st – the Jackets have gone 8-7-1 and the Kings 7-7-2.

Columbus has only managed one win in the previous three games vs LA this year, it was a 1-0 victory in LA in early January. That was the Kings only regulation loss in the first month of Darryl Sutter’s tenure behind the bench.

“They have some juice right now,” he began. “They have guys who are playing for roster spots and playing hard. I’ve been in that situation. They’re not giveaway games. Guys are getting ready for next year, tyring to solidify their spot on the roster. It’s going to be another tough game.”

Here’s Dustin Brown on the match-up…

“When a big trade like that happens, everybody understands everything surround the game. But, at the same time, I think everybody understands, it’s pretty minor in comparison to (us getting) two points at this time of the year,” said LA’s captain. “In Columbus, the headlines might be about Jeff Carter coming back, but for this team it has to be about winning the game.”

As for who will help get the Kings on the scoreboard first, Kevin Westgarth predicts it will be Drew Doughty picking up LA’s first marker of the evening.

If you’d like to participate in the MayorsManor First Goal contest, we’ll be giving away a free pair of tickets to an upcoming Kings home game. It’s easy to play, simply leave a comment below with the LA player you think will score first vs. the Blue Jackets…or reply to the facebook / twitter updates that will be posted around 4:00pm. All correct answers will be pooled together and one random winner will be awarded the tickets. Good luck!