You are here: Home / NHL / Blackhawks / Can Jeff Carter get five tonight for the LA Kings? 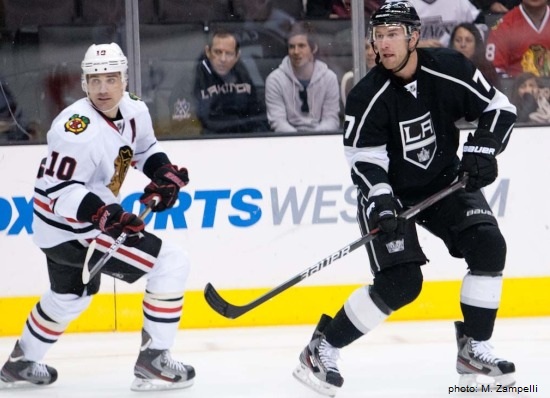 Five seems to be the magic number for the Kings newest forward, Jeff Carter.

In seven games since being traded to Los Angeles, Carter has scored in two of them – and both times he had five shots on goal. The other games saw zero shots on goal (vs. Columbus), one (vs. Nashville, the 3/6 game), two (vs. Minnesota and Nashville) and four (vs. the Blackhawks).

With Carter in the line-up the Kings are 4-3. However, the biggest change has been an overall increase in scoring by the team as a whole. For the first time in a quite a while, LA has two legitimate lines for their opponents to worry about. And guys on the Kings top unit have taken notice of another key element Carter has added to the team’s offense.

“He definitely has wheels,” said Anze Kopitar. “In the middle of the ice in their zone, that’s where he makes the most damage. He gets open in a hurry. Then, he gets rid of that puck in a hurry and that’s what makes him such a goal scorer.”

It hasn’t taken Dustin Brown long to like what he sees as well.

“The biggest thing that stands out is his speed,” said the Kings captain, when talking about Carter. “(Against Anaheim), he broke around and had that breakaway after getting the puck in stride, probably a step behind or even with the defenseman from the redline, and separated himself. When you have a guy finding holes…they create a lot. Having those jump-though-hole opportunities is a (direct) result of him being big and fast.”

Can he generate at least five shots on goal tonight? That seems to be the magic number for Carter.

As a side note, two of his three goals with the Kings have been on the powerplay. So, perhaps that’s something to look for tonight as well.

Finally, Carter has two goals in eight career contests vs. the Blackhawks. However, none of those markers came in the three games he’s played against them this season.

As usual, MayorsManor is sponsoring a First Goal contest tonight, where we’ll be giving away a free pair of tickets to an upcoming Kings home game. If you’d like to play, it’s easy – simply leave a comment below with the LA player you think will score first vs. Chicago…or reply to the facebook / twitter updates that will be posted around 5:00pm. All correct answers will be pooled together and one random winner will be awarded the tickets. Good luck!