You are here: Home / comments / Interview with Jonathan Quick’s replacement in net 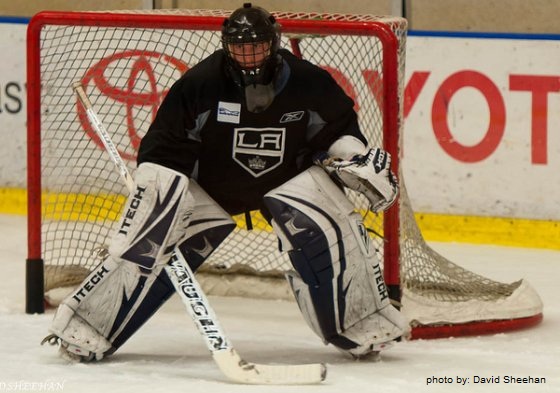 When the Kings returned to their practice facility on Monday after nearly a week long break there was a stranger sitting in Jonathan Quick‘s stall. Perhaps even more confusing to some, he was putting on goalie equipment.

Salvatore Tecci had been at the rink since noon, hours before practice was set to start. As the players slowly trickled in, each pretty much did the same thing. “They would walk past me, then turn and do a double take,” he said. “Many had a look of ‘Who is this kid?'”

Eventually, they came over and welcomed him. “But, they would introduce themselves by their first names, which didn’t really help because I didn’t know who they were,” he shared.  “Having lived in Boston for seven years, if I would have practiced with the Bruins, I probably would have known everyone on the team.”

Tecci primarily grew up in Henderson, NV and his only exposure to pro hockey was the Las Vegas Thunder of the old IHL.

“When I first stared playing, there were only two ice rinks within 100 miles,” said the 20-year old netminder. “I started skating when I was five, and eventually only became a goalie because one day somebody didn’t show up. So, I said ‘Yeah, I’ll play goalie, they play the whole game.’ I was always the youngest kid on the team, so they wouldn’t give me a lot of playing time before.”

In between filling in for one of his teammates back then and subbing for Quick while he was at the All-Star festivities, Tecci also attended the famed Thayer Prep School in Massachusetts – where a young Jeremy Roenick met Tony Amonte and skated on the same line together. As a freshman Tecci led the state in wins.

NHL scouts and college coaches paid him plenty of attention over the next few years. Yet, it all came to an abrupt end his senior year when he developed an eye infection that put him out of action for several months.

These days, he’s playing with the Long Beach Bombers of the Western States Hockey League (WSHL), a Junior ‘A’ – Tier III league. “We actually play our games in Lakewood – most Friday, Saturday and Sundays. This weekend we’ll be in Texas to play a team from another division,” he said.

One of his coaches knows Kings assistant Jamie Kompon and that’s where the connection was made. Even though the Kings’ ECHL affiliate is about an hour away in Ontario, they couldn’t borrow a goalie without making a roster move.

So, about a week ago, Kompon reached out to an old friend. “My goalie coach, James Jensen, asked me if I’d like to attend a Kings practice for a day. He said it so nonchalantly though, I thought he was joking at first.”

Reassured that it wasn’t a joke, Tecci called his dad back home in Nevada to share the news and was greeted with the same reaction – ‘You better not be joking with me!’

A few text messages and phone calls later, Tecci was at the Kings practice facility on Monday, getting a tour from Kompon while his parents sat in the stands waiting for practice to begin.

He hung out a little with Matt Greene and Jarret Stoll before practice started. “We sat in the players lounge and watched a little golf.”

Next, he rode a stationary bike for about 45 minutes while most of the Kings were working out. Then, it was time to get dressed and hit the ice.

“I tried to get out there quickly because I wanted to soak in every minute of it.”

As Tecci recalls it, only one goal made it past him in the warm-up drills, and that helped build his confidence – for a short while at least.  In the third set of drills Anze Kopitar came down and beat him high-glove. “I wasn’t expecting it. I thought, ‘Wow, that was a quick shot. I think that guy is good,'” he shared with a big laugh.

“The next guy to skate down tried to go high-glove on me as well, but I snagged it out of the air and thought, ‘Not this time.'”

Midway through the session, Kompon skated over to tell him they were going to do a scrimmage. “I thought ‘uh-oh’ as soon as I saw Kopitar was on the other team.”

He remembers stopping all the shots thrown at him during the initial five-on-five play. But, when it came time for five-on-three, things changed pretty quickly. “They scored a few backdoor goals on me and I thought, ‘Man, five-on-three’s in the NHL are a lot different than in my league.'”

Tecci admits to being a little nervous when everybody lined up for some breakaway drills later on in practice. “I think they scored on three out of the five breakaways on me. But, I still thought I was doing pretty well until the the last shot of the scrimmage. Kopitar came down on a breakaway from the redline, all alone. He did what felt like a quadruple-deke and he beat me towards my glove side.”

A few skating drills followed, where he spent some time talking to Jonathan Bernier. When they returned to doing some shooting drills, guys were now taking slap shots from near the top of the circles – including a series vs. his old nemesis, Kopitar.

“He took about five one-timers from near the dot and didn’t score on any of them. After his last shot, it looked like he slammed his stick in frustration – like he wasn’t happy that he couldn’t score on me. That made me laugh.”

There aren’t any official stats kept at practice, so that may not be exactly how things really went down. But, like any good story, it will probably only get better with time.

Unfortunately, Tecci won’t have the black Kings jersey to show off though. He says he forgot to ask if he could keep it.

Either way, for a kid who’s never even been to Staples Center to see a Kings game, it was an afternoon he’ll never forget.

NHL12 All Star Game results – Dustin Penner and Jack Johnson vs. The Mayor

With Quick away in Ottawa, what are the other LA Kings doing?