You are here: Home / contest / Doughty and Johnson make predictions – plus ticket contest 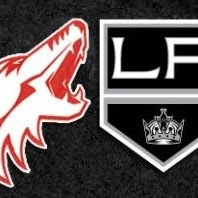 Tonight marks game five of the Kings-Coyotes six-game season series. Three of the four played so far have been decided by one goal and two have been shutout wins for LA. Additionally, the teams sit seventh and eighth in the Western Conference standings, separated by only two points.

Defenseman Jack Johnson sizes things up for us…

“Phoenix has been a tough team for us to play against. For whatever reason, we’ve had some really tough game with them. They’re a team who plays well within their structure. They’re not an easy team to play against, that’s probably the best way to put it. At times, they can lull you to sleep. It might not be the most exciting game for fans to watch, but it’s definitely going to be a difficult game to get two points from.”

As for who will score first for the Kings tonight, Johnson added – “Mike Richards. Cameras will be on him, hopefully he gets it. I’ll be pulling for him to get one.”

Good luck to him. Richards has one goal in the last 22 games. His odds improve when looking at his nine career games vs. the Coyotes, where Richards has scored three goals – including one earlier this season.

The film crew Johnson referred to is from the NHL Network, who have been following Richards the last few days as he prepares for tonight’s game. The footage will be used in a 30-minute special set to air next week, titled ‘NHL 36.’ More on that later.

Back to tonight’s first goal – Drew Doughty must subscribe to the ‘go big or go home’ theory. Not only did he identify who he thinks will score, but also wanted to add in a few more of the stats surrounding it.

For the record, Brown has 10 goals in 46 career games vs. Phoenix.

If you’d like to participate in the the MayorsManor First Goal Contest tonight, we’ll be giving away a free pair of tickets to an upcoming Kings home game. It’s easy to play, simply leave a comment below with the LA player you think will score first vs. the Coyotes (you can even use your facebook login)…or reply to the facebook / twitter updates that will be posted around 7:00pm. All correct answers will be pooled together and one random winner will be awarded the tickets. Good luck!

Finally – over the last 48 hours we’ve had lots of related news and notes to post in advance of tonight’s game. If you missed any of those articles, a few of them have been linked below for your reference.