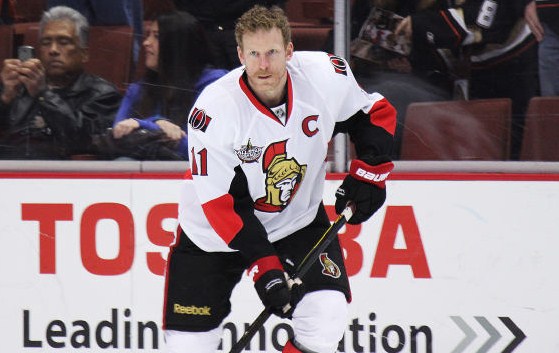 Ottawa captain Daniel Alfredsson has played 1,100 game in a Senators uniform. Just 18 of those match-ups have been against the LA Kings. So, saying it’s a team he doesn’t know very well is an understatement.

Still, it didn’t take him but more than a few seconds when I asked if he had any memories from those games. “We had one game in Ottawa. I think we ended up losing, but we were up by four or five goals. They came back and I believe they won in overtime. It was a crazy game and a fun game to play in. That’s probably the one that sticks out the most.”

For the record, that game was just over 11 years ago – played January 16, 2001 – and the Kings rallied from being down 5-1. Goals by Luc Robitaille tied things up at 5-5 and later 6-6. Brian Smolinski‘s overtime winner was his third goal of the game and gave the Kings a 7-6 win. Jamie Storr was credited with the victory in net, after Steve Passmore had given up the first five goals to Ottawa.

Back to tonight though, Alfredsson is looking forward to playing a Western Conference team. “It’s definitely more fun,” he said. “We play Toronto, Boston, Montreal and Buffalo a lot of games. You know exactly what you’re going to expect from them. We don’t know as much about (the Kings). We know they’re a good defensive team. They don’t give you much, but they don’t score a lot of goals either. We’ll try to find a way to get goals without giving up much. That’s going to be the challenge for us.”

Next weekend, he’ll be captaining one of the NHL All Star teams. So, we took the opportunity to do something we did last year with a few of the Kings – our own mock draft.  Using the rosters from this coming Thursday’s All Star Fantasy Draft, we did a mini-event. Let’s call it Alfy vs. The Mayor.

He was given first choice at the roster of guys going to the All Star Game. We then alternated picks, to ultimately give us each three forwards, two defenseman and one goalie. The only caveat was we removed the other Senators and Jonathan Quick from the list.

Here’s how things went down, in the order they were picked…

Will Alfredsson really take Hossa if given the first pick at Thursday’s draft? We’ll have to wait a few more days to see. First things first, the Senators and Kings meet up tonight at Staples Center.

NHL All Star Game 2011: Drew Doughty vs The Mayor