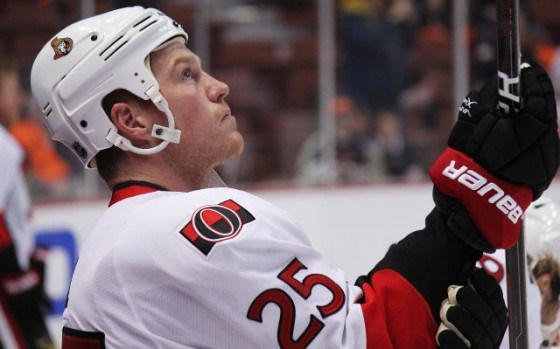 When the Kings last met up with the Ottawa Senators, then-rookie Kevin Westgarth had what Jim Fox described as, ‘his first true heavyweight scrap.’ On the other end of that dance was veteran Chris Neil, who was celebrating his 600th National Hockey League game that night.

Later this evening, Neil will meet the Kings again – this time, fresh off of playing in his 700th NHL game over the weekend. Like last year’s contest, we hooked up with him for a pre-game chat …

Defenseman Jack Johnson has often remarked it gets a little boring playing so many games within your division. And it’s something Neil agrees with, noting – “Every game is an important game now, especially for teams who are trying to climb in the standings or hold a spot. I think LA has stepped up their game, they’re playing extremely well. However, when you come to the rink and you have different video – of teams not in your conference, which gets repetitions – you get a different look and guys thrive off that.”

Even with all those games against the Maple Leafs, Bruins and Canadiens, that doesn’t stop him from keeping an eye on the Kings, Ducks and Sharks – “We watch the standings on their side too. We know LA is a good team, with a lot of good players. They work hard. You see some of their games, after you finish your game and go out for dinner or whatever. When you catch the games, you see what they’re playing like and the Western teams play a hard game. It’s my style of game too, so I look forward to it.”

Speaking of that point, Kings coach Darryl Sutter hasn’t had Westgarth in the line-up much lately. If he sits again tonight, will that make Neil’s night a little bit easier?

“Not really,” he explained. “I just go out and play my game. I play physical. I try to play in between the whistles and try not to be in the box that much. But, I go out and stick up for my teammates when I have to. I try to do it when it’s right for the team, not myself.”

While the Senators have been in Southern California for several days already, Neil wasn’t showing much interest in any extracurricular activities. “We said right from the get go on this trip, we basically play every other day and then back to back to end it. So, we have to look after ourselves and get a lot of rest. Whenever you’re traveling this much, that’s half the battle. We might take in a nice dinner here or there, but other than that, we’re here for business, not pleasure.”

To read Neil’s previous interview on MayorsManor – where he breaks down who are some of the toughest guys in the league right now, discusses some of his fighting strategies, addresses former teammate Brian McGrattan calling him out in the media and much more – click here.

We also interviewed Sens captain Daniel Alfredsson prior to tonight’s game – he talked about playing the Kings and possibly tipped his hand regarding the upcoming NHL All Star Game Fantasy Draft. You can find that conversation here.
Follow @mayorNHL