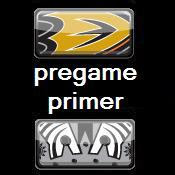 Divisional games in any sport are supposed to be close. So, last night’s 2-1 win by the Kings in a shootout looks to fit the bill. However, it was probably a game where they gave the visiting Ducks a free point.

LA entered the third period up 1-0 on a goal by Mike Richards, who converted a Jack Johnson shot during a 5-on-3 power play.

With less than four minutes remaining in the game, Teemu Selanne tied things up. It was his 51st goal and 110th point (in 93 games) against the Kings, his personal best against NHL team.

Still, when things were over, Anaheim coach Randy Carlye acknowledged his team didn’t play a full 60-minute game – “We didn’t really get our game going until the last half of the hockey game, then we played a lot more of the type of game that’s going to be required.”

Bobby Ryan credited the Kings goaltending for shutting them down most of the game – “We had so many chances there and Quickie [Jonathan Quick] kept standing on his head and really sucking pucks in, not allowing any kind of rebounds in and chances for us all game.”

Quick will start again tonight for the Kings, as they look to go up 2-0 in the Freeway Faceoff series. LA’s only line-up change will be Brad Richardson replacing Trent Hunter.

Like last night, the official hashtag on twitter will be #FreewayFaceoff – use it when talking about the game and watch SoCal hockey top the trend chart.

Also, we’ll also have a special contest tonight, open to all Kings and Ducks fans. Before the puck drops at 7:00 pm PST, post your guess for the final score tonight in the comments section below (using your facebook profile or by signing in to the website – either way, it’s super easy).  One random winner will be selected from all correct guesses and they’ll win a free t-shirt from Glass Bangers.  Good luck!

Finally, here are some other Kings v Ducks stories to get you primed and ready to go…