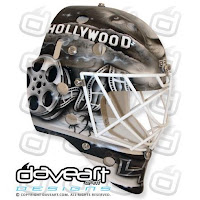 Former NHL goaltender Kevin Weekes, now an analyst on just about every station that covers hockey, selected his top five goalie masks of the season yesterday.

Low and behold, coming in at number one was the Kings’ Jonathan Bernier.

The mask was painted by DaveArt and there are multiple shots of the mask, similar to the one at the left, posted here.

Weekes associated the lion on top of the mask with royalty (which is true), yet Bernier also has a lion tattoo on his left arm – and it was always on his mask in Manchester as well.

Earlier today, I asked Bernier why he wears his old mask during practice and only breaks out the new black, silver and white one for games.

“I’ve been doing that because I wear plastic protection on my practice mask,” said Bernier. “I just don’t really like to wear that in games though. So, that’s why I have two helmets. People notice it because (my practice mask) is purple from last year. But, instead of making another one just for practice, I figured I’d wear that one.”

I also took the opportunity to follow-up on some exclusive info he dropped on me back in the summer. At the time, he was starting to talk with a local graffiti artist about doing a special mask for this season.

“It’s coming soon. I can’t actually reveal the dates when it’s going to come out. But, it should be pretty soon, I guess.”

So, perhaps it’s the purple and gold mask?

He just smiled and we moved on to another topic.

Also, more notes from Tuesday’s practice can be found here – including quotes from Mike Richards, comments from coach Terry Murray on his ‘issues’ with Scott Parse…plus, the immediate plans for Dustin Penner.

Bernier on coach Murray’s goalie plans for this season