If you’re a loyal reader of MayorsManor, you know all about the man known as ‘Hollywood.’

JF Berube was drafted by the Kings in the fourth round of the 2009 NHL Draft. Since then, he’s gone on to become one of the top goalies in the QMJHL.

Here are some details on his new mask.

As shown in the pictures below, the left side features LAX airport, the top of the mask has the Manchester Monarchs logo (with a slight modification, as the artist used the Kings crown on top of it) and the right side displays a lion above the Hollywood sign.

The mask is done in black, silver and white as those will be the Kings primary colors this season. He went with an overall jungle theme to honor Manchester’s ‘Welcome to the jungle’ slogan.

We’ll have some more pics later. For now, here’s a teaser… 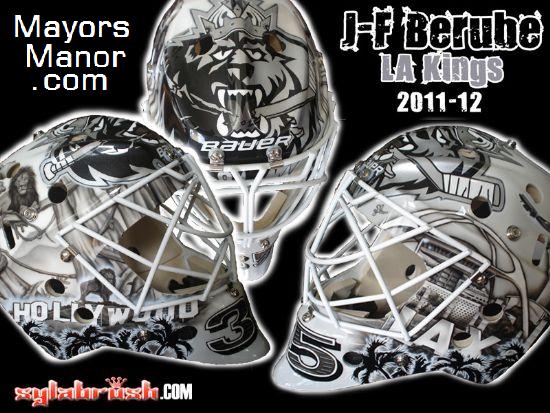 To read the most recent article on Berube, featuring comments from Kings goaltending coach Bill Ranford, where we jokingly discuss the possibility of him needing a new nickname this season – click here.