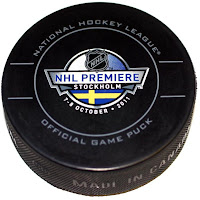 Hang on, relax. You only have less than an hour to go and you’ll be just fine…hockey will be back!

To get you primed and ready to go, here are some quick tidbits on the Los Angeles Kings vs New York Rangers match-up. Also, be sure to take note of the details for today’s ‘first goal contest’ listed at the end of this article.

– Kings all-time Record against the Rangers: 43-62-19. This is the only meeting between the two teams this season, as it was last year. When they squared off on February 17, 2011, the Rangers won in a shootout 4-3. Dustin Brown picked up two points that night and the Kings collected another point on their nearly-month-long road trip (post-game notes and highlights from that game can be accessed here).

– Rangers defeneman Marc Staal, one of their top defensemen, didn’t make the trip to Europe due to lingering symptoms from the concussion he sustained in a game last year.

– Rangers goalie Henrik Lundqvist is from Sweden and earlier in his career played in the Frolunda HC system – the same organization that Kings’ 2011 draft pick Michael Schumacher was part of last year (article).

– At least four former NHL players to suit up for both the Kings and Rangers will be in attendance – Luc Robitaille, Mattis Norstrom, Tomas Sandstrom and Bernie Nicholls.

– Richards vs. Richards: In 23 career games vs. the LA Kings, Brad Richards has 26 goals (seven goals, 19 assists). On the other side, Mike Richards has played 37 games against the New York Rangers, picking up 12 goals and 11 assists.

– Today’s headline may be ‘Richards vs Richards,’ yet it easily could have been ‘Richards and Richards take on the Rangers.’ Just days after Kings GM Dean Lombardi pulled off a huge trade to acquire Flyers’ captain Mike Richards, he was making a big-time pitch to free agent Brad Richards. Ultimately, LA lost out on Brad when he signed with New York. However, Lombardi called the overall experience the team’s finest hour (full quote and explanation here).

– Mike Richards made his NHL debut against the Rangers in October 2005. Now, he’ll make his LA Kings debut against the same team. And the Rangers are a group he knows well, having played them 36 times in his career. Earlier this summer, he spoke about his ‘hatred’ for the Rangers on MayorsManor and his probable showdown with Brandon Dubinsky in today’s game (article linked here).

– “I love playing the Rangers…They’re one of the better teams in the East and I definitely think we’re one of the better teams in the West. So, it’s going to be a real battle,” said Drew Doughty in an article full of quotes for Kings players posted earlier today. To read what he, Anze Kopitar, Jarret Stoll, Willie Mitchell, Simon Gagne and others had to say about today’s game, click here.

– Line-ups for the game are expected to be as follows:

[note: Dustin Penner is out, with what is believed to be a groin injury]

– If you can’t watch the game on TV, listen it to it for free via the online radio broadcast. Simply click the ‘listen live’ link here.

– If you’re on twitter, be sure to send at least one (preferably more) tweets during the game using the hashtag #GoLAKings – there is a battle going on with Ranger fans and the money raised goes to Children’s Hospital. Plus, a few random people will win prizes, including free airline vouchers.

– CONTEST: One random winner will get a free t-shirt from our sponsor, Ref You Suck. To enter, simply guess which player will score first for the LA Kings. Post your guess in the comments section down below.

Jack Johnson’s not worried about much, including his plus-minus

NHL season opener special – SAVE 15% on all shirts in the MayorsManor store, including the ‘IN DEAN WE TRUST’ and ‘I Survived Drewmageddon’ shirts – details here: http://bit.ly/oHLIQe