You are here: Home / NHL / Coyotes / LA Kings at Phoenix Coyotes – what to watch for 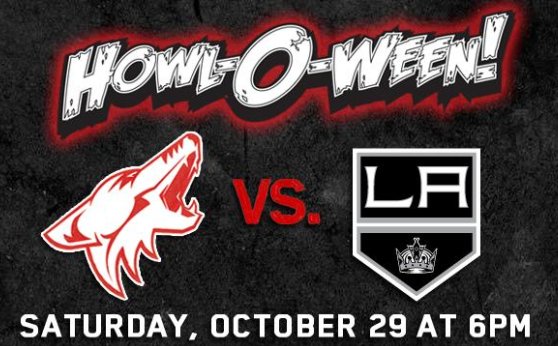 Yes, that fine graphic comes to you courtesy of the Phoenix Coyotes.

The two teams split their season series last year 3-3. And when they met last week for the first time this season, Jonathan Quick picked up a 2-0 shutout.

Here are a few things to look for tonight.

– Drew Doughty: After missing the last five games, the Kings get back their best defenseman. In the four games he played prior to the shoulder injury, he picked up one point (an assist) and two penalty minutes.

– Line Shuffling: Dustin Penner returns to the top line, while Simon Gagne will get a rest tonight (nothing serious, just a little sore/stiffness). Big #25 is still looking for his first goal of the season, while his center, Anze Kopitar, hasn’t scored a goal in the last four games.

– Parse Watch: He’s back in the line-up, following his first goal of the season on Thursday in Dallas. He’ll be with Mike Richards and Dustin Brown on the second line.

– Phoenix roster moves: They claimed a Brett MacLean on waivers yesterday. He’s not expected to play. However, they may suit up center Cal O’Reilly, who they just acquired from Nashville.

– Fun from twitter: Coyotes defenseman Kyle Turris recently asked for a trade, to which Hall of Fame winger Brett Hull tweeted ‘Kyle Turris fire your agent ,19 career goals is not a position of strength in negotiations #grabearsfirmly’

– Attendance: Which game will be watched by more fans live – the one the other night in Dallas or tonight’s game in Phoenix?

– Biz Nasty: You can’t talk Kings vs Coyotes without talking Paul Bissonnette, Kevin Westgarth and Kyle Clifford. Comments from all three, about each other, were documented here last season. Westgarth’s only fight of the season was with Bissonnette last week.

– Andy Miele: Last year’s Hobey Baker award winner, as the top college hockey player, signed a free agent deal with the Coyotes this summer and was recently recalled. In a LA-Phoenix Rookie Game prior to training camp, he was a one man wrecking crew.