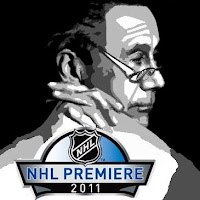 Believe it or not, the Kings will play their final pre-season game in less than an hour. After that, it will be about 72 hours until the 2011-12 NHL season is finally underway!

LA’s opponent today, the Hamburg Freezers, are one of the many teams owned around the world by Phillip Anschutz – yes, the same guy who owns the Kings.

Below are few pre-games notes to get you primed and ready to go:

– The game starts at 10am PST and can be viewed for free online here (just know that the commentary may be in German… and according to Google translate, elfmeter means penalty)

– According to coach Terry Murray, the Kings will skate eight defenemen in the game…meaning rookie Slava Voynov will be in the line-up again (Murray spoke about the rookie’s play during his press conference yesterday, recapped here)

– Also scheduled to play on the blueline, making his pre-season debut, is Drew Doughty (read his pre-trip comments here, where he calls out Willie Mitchell)

– Reports from Germany also indicate Murray will have Jonathan Bernier relieve Jonathan Quick about half way through the game vs. the Freezers.

– Dustin Penner is not expected to play, after not feeling well and leaving the ice during practice yesterday

– The Hamburg Freezers joined the German Elite League (the DEL) in 1999. They haven’t made the playoffs the last two seasons, including finishing 11th out of 12 teams last season.

– Several of the Freezers players have connections to current and/or former members of the Kings organization.

* Rob Collins played with Trent Hunter and the New York Islanders during the 2003-04 season.

* Brett Engelhardt played two games with the Philadelphia Phantoms (AHL) while John Stevens was the head coach there.

* Garrett Festerling played for the Regina Pats (WHL) in 2006-07. While there, he was teammates with former Kings first round draft pick Colten Teubert – who was traded to the Oilers back in February for Penner

* Freezers goalie John Curry has spent the bulk of his recent career with the Wilkes-Barre/Scranton Penguins (AHL) – so, he’s played against many of the Kings players who have come through the Manchester Monarchs on their way to the NHL (i.e. Bernier, Voynov, Trevor Lewis, etc.)

* The hat-trick of connections goes to Kevin Schmidt, who played college hockey at Bowling Green from 2005-09. During those years, he played at least three different members of the current Kings roster – Zatkoff (University of Miami, Ohio), Scott Parse (University of Nebraska-Omaha) and Jack Johnson (University of Michigan)

“The game tomorrow has a lot of meaning for the LA Kings. We’re trying to get ourselves through the end of our training camp here and get our team ready to play hockey (and open the season later this week). We’re putting a lot of importance on (this) game. We’re still looking at some players and we’re still looking at some new adjustments to our game, to our team system and structure.”

“We want to come out and play well. Not only to play and entertain, but again, it’s important for our team to come together and get our team chemistry (figured out). We have a lot of new players that we’ve added to our team – key guys – and I have different line combinations in place so the chemistry that they’re working on trying to develop, it’s very important that they continue to push it to the next level and have our game in order as we start to play in Stockholm against the Rangers (on Friday).”