You are here: Home / hockey / Kopitar training in one of Europe’s most beautiful cities 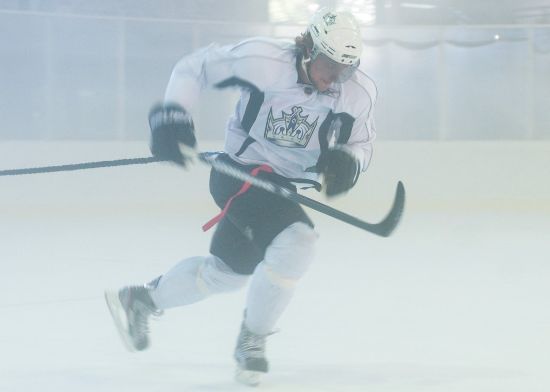 Stand up and take a bow if you’ve even heard of Bled, Slovenia.

According to several travel sites, it’s one of the most beautiful cities in Europe – perhaps the world.

The small town is nestled in the Julian Alps, with a castle high atop one of the mountains and a lake below, which features a small island in the center – where a little white church stands.

It’s no wonder why Kings forward Anze Kopitar likes to go home every summer, Bled is just a few miles from where he lives.

This romantic, post card-like town is also where he and his brother Gasper are training this week.

Under the watchful eye of their father Matjaž, who is also head coach of the Slovenia national team, they’ve been preparing themselves for their return trips to America.

Anze is due back in Los Angeles early next month and, as I reported a few weeks ago after speaking with Gasper, he’ll be back in Des Moines (USHL) when their camp opens on September 8th.

Just a few weeks ago, Gasper was in Sodertajle (Sweden) for a tryout and last week he played a game with the Slovenia under-20 team.

On the ice with them today were goalie Gaber Glavič (he was on the national team a few years ago), Ziga Svete and Rok Jakopič (both of whom are European hockey free agents at the moment).

Our man on the scene, Matic Klansek of Sportida.com, was there today and snapped up a couple of photos for MayorsManor readers.

The picture above was not taken with a special Hollywood smoke filter, nor were they shooting a Halloween commercial with blocks of dry ice.

Apparently, it’s 35°C (95° Fahrenheit) in Slovenia right now, which is very hot for them. They’re expecting temperatures to drop throughout the remainder of the week, so the fog will be dissipating in the ice hall (arena/rink), says Klansek.

This second picture was taken in a ‘ice hockey hall cafe’ and on the wall behind Anze is a picture of Rudi Hiti, an IIHF Hall of Famer. 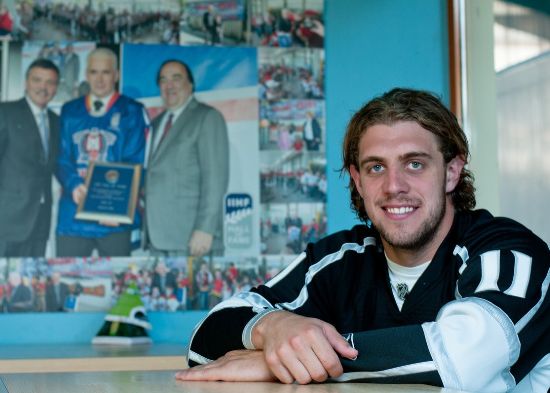 A series of articles on all three Kopitars is expected to run on Sport TV throughout the week.

The first such article went up soon after today’s on-ice sessions.  In the story, Anze’s father proclaimed his leg injury healed, he’s recovered and ready to go.  The elder Kopitar also says this summer’s workouts were by far the most intense and lengthy of his career, not just for the leg, but his ‘upper and middle torso’ as well – all part of a training program designed by the Kings trainers when Anze was still in LA following the end of the NHL season.

To see what Kings GM Dean Lombardi had to say about Kopitar’s off-season training and recovery, click here to read a recent MayorsManor article where he said ‘Kopitar may be the new Blake Griffin.’

Links to other Gasper and Anze Kopitar related articles can be found below.

…and coming up tomorrow on MayorsManor – Dustin Penner stops by for an exclusive visit, to chat about the Kings signing of Ethan Moreau, his possible new jersey number and why Alec Martinez is holding things up.

Bled, Slovenia – go check out some of the pictures of this place – WOW!

More of Matic’s Kopitar photos can be seen in the following galleries:  from a charity golf tournament, vs. the Phoenix Coyotes,vs. the Detroit Red Wings and vs. the Colorado Avalanche.