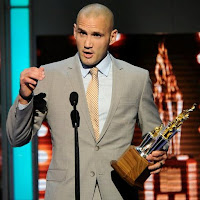 A few days ago Ian Laperriere joined us to talk about the Mike Richards trade. Did the Kings get good value in the blockbuster swap with the Flyers? Lappy thinks so. If you missed the full interview, you can read his thoughts here.

Because everybody loves Lappy, he’s back today for more. This time around we cover his health, winning the Masterton Trophy at last week’s NHL Awards and his plans for life after hockey.

MM: People always want a health update. So, how are you feeling these days? Any news?

IL: You know what, I feel pretty good. Other than my eye, that’s what drives me nuts, I still have issues with blurry vision in my right eye. Other than that, I feel great. I’ve been training hard and I’m probably in the best shape of my life. But, still, when I’m on the ice, with my eye, I don’t feel quite myself. Until that goes away, I don’t plan on going back. At least I’m feeling pretty normal though.

IL: I still have a year left on my deal and I’m going to give myself that year. If my eye doesn’t get any better, I’m just going to call it a career. It didn’t get that much better over the last year, so I don’t expect it to be cleared in one more year. But, if it does, great. If it doesn’t, I’ll move on and do something else. Either way, I’m OK with it.

MM: Last time we spoke you were spending quite a bit of time with some of the younger players in the Flyers organization. Is that something that you’re still involved with?

IL: Yes, even more so now. I had so much free time this year they offered me a chance to do that. I spend my summers in Philly and we do have a bunch of young guys there. I’m more than happy to do that. It’s something I’d like to explore more when I’m officially done. It gives me the tools and opportunity to do that, so I’m doing it. It’s great. I have a lot to give back to those young guys and I will – I’ll try to help them as much as I can.

MM: Does that mean you’d like to get into scouting, coaching or something different?

IL: Maybe something in between, like helping guys on the ice. I want to follow them during the year and if they need advice, I can help. I think the Flyers have enough scouts. However, if I can help in that regard, I will. But, at the end of the day, I’m still in the game, so I know what’s going on. If I can help a junior kid adjust his game to make it a pro game, I’d like to do that. That’s the side of the game I’d like to work on.

[note:  In a bit of news that went fairly unnoticed last week due to the NHL Awards, Laperriere was actually part of an ownership group that just purchased the Montreal Junior team of the QMJHL – home of Kings prospect JF Berube. Some of his fellow partners include Danny Briere and Jean-Sebastien Giguere. The team is expected to change their name and colors before next season. All three players will also have advisory roles with the team. It’s a bit of a switch for him, as Laperriere played his junior days with Drummondville of the QMJHL.]

MM: The high point of being in Las Vegas for the NHL Awards last week had to be winning the Masterton. What were the other take-a-ways for you?

IL: Lucky (Luc Robitaille) giving me that trophy was something special. I owe him a lot. I learned a lot from playing with him. We’re good friends now and we keep in touch every week. That’s a guy I look up to. He helped me become a good pro on and off the ice. Just having him be the one to give me that award was pretty special itself. But, having my kids there – they walked the red carpet, they did everything all week. I’m so glad my kids got to experience that too.

A well deserved award for genuinely one of the nicest guys in hockey.  And a true warrior on the ice.

Interview with Luc Robitaille – 20 Questions for #20

Interview with JF Berube – Kings goaltending prospect in the QMJHL