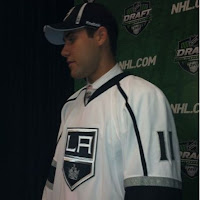 I’ll have full notes on the players listed below up later. For now, here’s a quick recap on some more of the Los Angeles Kings draft picks today…

Fourth Round – LW Michael Mersch from the University of Wisconsin (pictured). Yes, another college player. During his just completed freshman year as a Badger, he posted 19 points in 41 games. He’s 6-foot-2, 198 pounds and is a product of the US National Program. Mersch – along with other Kings prospects Derek Forbort, Kevin Gravel and Nick Shore – has been invited to this summer’s evaluation camp for Team USA’s squad being assembled for the 2012 World Junior tournament.

Fifth Round – LW Joel Lowry from Victoria (BCHL). The 6-foot-1 and 180 pounder had 24 goals and 43 assists in 42 games this past season. His brother Adam was taken earlier today by the Winnipeg Jets and his dad is an assistant coach with the Calgary Flames. Joel is scheduled to attend Cornell University in the fall – the same school that turned out former Kings prospect Matt Moulson.

Sixth Round – pick was traded, along with 2012 third rounder, to move up to #82 and select Nick Shore from Denver (NCAA) – detailed in a previous post this morning

Seventh Round – LW Michael Schumacher. A formula one driver? No, a forward for Frolunda HC. Last year, Kings GM Dean Lombardi selected a Russian with his final pick (Maxim Kitsyn). This year, he went to Sweden. And yes, he was trying to fill the gaping hole at LW throughout the entire organization. Schumacher is 6-foot-3, 198 pounds.

Overall, the team took one goalie, two centers and three left wingers. By country, they selected three Americans, one Canadian, one Finn and a Swede.

Only one Canadian? My how the game has changed.