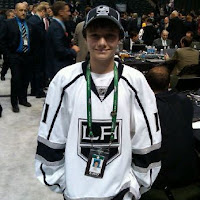 As I posted earlier on twitter and facebook, that’s a picture of the new Los Angeles Kings road jersey that will be featured when the team takes the stage at the draft this weekend – most likely tomorrow (as GM Dean Lombardi doesn’t have a first round pick tonight).

Well, here are some more of the plans…

After much discussion on which jersey should be used as the third version, it’s been settled – the current home jersey, black base with the crown and purple trim, will become the new third jersey.

For fans loving all things retro, the team will also wear vintage jerseys during three ‘Legends’ games – dates still to be determined.  Those will (probably) be the same ’67-era purple and gold jerseys worn a few times this past season.  However, it could be a different purple/gold version, depending on the players/era they honor.

During home games at Staples Center the Kings will wear the black version of the jersey pictured above.