You are here: Home / comments / Oscar Moller on mini-golf, Manchester and LA struggles 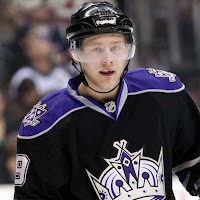 While it may sound like a lifetime ago, not much has changed. The battle in net that night was between Jonathan Quick and Ilya Bryzgalov, as it will be tomorrow night in downtown LA.

And the final score was 3-2, with goals by Dustin Brown, Michal Handzus, Adrian Aucoin, Martin Hanzal and Keith Yandle. All of those guys are still with their club – even though Hanzal isn’t likely to play due to a lower body injury.

Moller was moved back to a line with Dustin Penner and Handzus today at practice. Afterwards, we had the following chat…

MM: If I understand the translation on your twitter profile correctly, you’re not a fan of bowling or miniature golf. Is that right?

OM: I suck at bowling and I suck at mini-golf. Mini-golf just makes me mad. If I miss one, then I just become very frustrated. You want to do well at it, you know.

OM: I think I felt the best in the first two games. Then, I think I struggled a little bit in the last game, some mental breakdowns. But, you just have to put it behind you. You learn from it and move forward from there because there’s a pretty big push for the playoffs coming here over the last few games.

MM: Manchester split their games over the weekend. Have you been keeping an eye on what’s going on back there as they get ready to wrap their season up?

OM: Yeah, I saw they beat Portland 5-2. They have a bunch of guys scoring too. I think it was five different guys who scored in that game (MM: it was). I think that’s good, to get a pretty good spread of the goals there. They just need need to keep it going. They clinched home ice (in the first round of the playoffs) with that win too.

MM: Back there you were playing with some pretty regular linemates. What about here, do you feel you’ve been able to develop any chemistry with some guys yet?

OM: I feel pretty good playing with Pens (Penner) and Zeus (Handzus), two big bodies. I just have to use my speed and my quickness, work the other team down low, cycle the pack and try to beat guys back to the net.

Moller and coach Terry Murray are probably hoping to see some of that chemistry translate into goals tomorrow night.

The Kings need scoring punch right now about as badly as they need points.

Kings vs. Coyotes Preview with Tyson Nash – he breaks it all down…and more!