You are here: Home / AHL / Terry Murray on the new guy, Oscar Moller 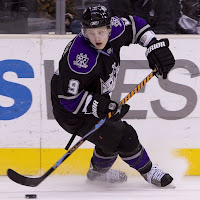 With the injury to Justin Williams, the Kings recalled Oscar Moller from their AHL affiliate in Manchester this week.

In 59 games for the Monarchs this year Moller has scored 23 goals, second on the team (LW Bud Holloway leads with 25 goals). He also spent four games up with the Kings earlier this season, scoring one goal (against Detroit on December 13th).

The 5’10” right wing was drafted by the Kings in the second round of the 2007 NHL Entry Draft.

After practice today, Kings coach Terry Murray talked about Moller and the expectations for the remainder of the season…

“Having had Oscar here in the past, he’s a puck skilled player. He can fit on different lines, his awareness to the responsibilities in the system are right on every time. Again, we’re not going to replace Williams. There’s going to be a difference. You’re not going to miss all of Justin Williams. But, what is the difference? I’m not sure yet.”

He was then asked about the opportunity facing Moller, for him to prove himself…

“This is a great opportunity for Oscar and I think he’s very aware of it. We’re coming down to the final games of the season, a critical time, big push every night – you have to play with a playoff attitude. He’s going to be on a top line with lots of responsibilities to play five-on-five and also get on the special teams. So, his time is now. It’s three years in and this is a time we’ll be watching him very closely as an organization.

What have you seen from him on the power play during his previous visits to Los Angeles?

“Going back to the first training camp, that was one of the things that really attracted our attention, was his play on the power play in the exhibition games. He was a guy who, as you saw today (in practice), he played on the half boards, he attacks that seam, he goes to the net and he has very nice hands. So, he definitely will get power play time tomorrow night.”