You are here: Home / comments / LA Kings center Anze Kopitar – What if? And what’s next? 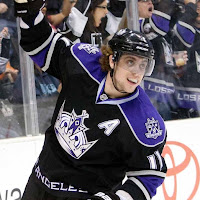 I’m not so sure March 26, 2011 will have the same staying power over time. But, for now, it’s the date that Kings players, fans and management can’t erase from their minds.

When Anze Kopitar went down with an injury that afternoon it instantly created numerous ‘what if’ scenarios.

Perhaps, if he hadn’t damaged his leg, we’d be talking about the second round today, instead of next season.

Thus, rightfully so, GM Dean Lombardi and coach Terry Murray brought him up several times during our recent de-brief meetings…

Lombardi on Kopitar’s defensive improvement – “Over his first couple of years in the league…he was free-wheeling and it looked great on offense, but he was not a great defensive player. I think, this year, he became one of the best defensive players in the league. You’ve got a guy here now that has has already done the Yzerman, Sakic transformation. It usually took those guys until 25, 26 (years old) before they figured out how to be a complete player. This kid has done it at an early age. I think that’s huge, particularly when you’re dealing with big bodies like San Jose down low. But that’s the irony of it. We all looked at it and thought missing his offense (would be an issue in the series), but we end up missing his defense.”

They also missed his compete level – “I remember, during the season, the way he (Kopitar) competed with one-goal leads, the way he played at the ends of some games. It said, ‘We’re going to win this game.’ You could just see where this guy said, ‘We will not lose this game.’ So, that stride is huge.”

Murray built upon those statements when speaking about what he saw from Kopitar this season – “His game went to the next level. He’s a complete player. He plays both ways, both ends of the rink. I love where his game is at right now. His attitude in the locker room is becoming more of a leader. There’s that pro attitude about how to prepare for games and how to do the work after the practice is over. As an example, when we do our team workout, he’s clearing the way, he’s setting the tone, and that is what ownership and leadership is all about. On the on-ice part of it, when something needs to get done, he clearly is the guy I look to on the forward side of it, to get on the ice. We see him with puck-possession time, with the puck on his stick and he’s our best guy. That’s leadership. That’s wanting to do something the right way.”

When discussing how some players still need to improve their off-season conditioning (i.e. Drew Doughty, Dustin Penner, etc.), Lombardi mentioned Kopitar as one of the guys who ‘bought in’ last summer – “In the last couple years, we’ve set a culture where you have to be in shape here…Kopitar took a step last year, to become average in conditioning, so it’s mostly our kids now who have to take that (step), which is usually the way it goes.”

As I posted on Wednesday, Lombardi also talked quite a bit about the power play needing to incorporate Kopitar more – with quotes like, “The biggest areas of improvement is getting our best player – Kopitar, our number one scorer – in situations where he can produce. Because if you look at it, his numbers five-on-five are amongst the tops in the league. His power play, compared to the top guys in the league – for him, five goals – was way down. If he has the average number of power play goals as the other top guys, he’d be one of the top scorers in the league.”

Anze will spend part of the summer rehabbing and training with his younger brother, Gasper – who was a recent guest here on MayorsManor.  Check out that interview here.