You are here: Home / comments / Jarret Stoll Wants to See Some Push Back 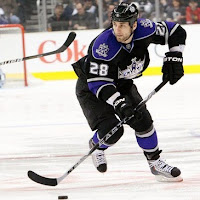 I think I’ve read that somewhere before.

And it certainly applied to Jarret Stoll on Saturday night.

He was in the press box watching the Kings take on the San Jose Sharks. Not exactly what he had in mind when the team officially qualified for post-season a few weeks ago.

However, his teammates dominated the 60-minute game and left for home with a 4-0 win – but more importantly, a 1-1 spilt in the opening two games.

After serving his one-game suspension, Stoll returns to the line-up tonight at Staples Center. In the conversation below he breaks down what’s gone down so far and looks ahead to game three…

MM: What are you doing to help keep some of the younger guys calm, especially after things like that early goal in game one?

JS: On the bench you’re just talking, saying ‘settle down, get the puck in deep, try to get the puck in and get on the forecheck.’ Obviously, spending time in your own zone, eventually it’s going to hurt you. It’s good they didn’t get that second goal right away too, then the fire drill would have really been on. But, we settled it down right away. Quickie made a couple of big saves after that and we just kinda got our game going slowly, slowing got our feet going, got on the forecheck and started cycling their ‘D’ and getting chances ourselves. By doing that, you could tell on the bench, we got our confidence going and knew we could play with those guys.

MM: Talk about what you saw off the ice in game two. It’s a rare chance for you to get a different perspective on the team’s performance.

JS: Well I definitely liked what we were doing – cycling the puck, getting on loose pucks, we were winning a lot of battles to those loose pucks. Where a lot of the open ice was – obviously, they’re playing a pretty structured system, as we are – but, there are some spots on the ice that are open and we can maybe exploit a little bit. We did a good job of that in game two. We’ll try to do a lot of those things again in game three, almost press the repeat button – go after them and get pucks in. We can’t be turning pucks over in the neutral zone. We did that a couple of times in both games and it comes right back at us. We know their skill level and what they can do. If we keep getting pucks in, just chip it in, chip it in – whether its a hard rim or a soft dump in a corner – those are tough plays for defensemen to go back and make. When you’re playing d-zone, it’s tough minutes to play. When you’re playing d-zone all the time, battling with your opponent defensively, those are going to pay off in the end if we play the game down there.

MM: For you personally, do you think you have any sort of advantage going into tonight, in that you’ve had a different look now, you’ve seen some things?

JS: Nah. It was good to watch from up top – if I had to. No advantage though. You see the game differently, a little bit. Maybe you can try to realize what’s open on the ice, what’s not open, like I said. Try to be there, try to use that, remember from up top what was happening. But, I’ll just prepare and get ready for game three like any other game.

MM: So, let’s wrap up with that – what do expect, in terms of pace and tempo – especially in the first period?

Like Ryan Smyth said yesterday, the Kings are counting on the seventh attacker.

After reading some of the comments from one member of the NoCal media, that shouldn’t be a problem.

Rob Scuderi on Expectations and Being Extra Special

Jarret Stoll Gets Physical With the Dallas Stars

Stoll on His Fight With Dustin Penner