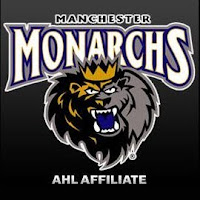 Yesterday afternoon the Manchester Monarchs wrapped up their regular season schedule with a 3-2 loss to the Providence Bruins.

More significantly, Kings uber prospect, Tyler Toffoli, made his professional debut and scored the first goal for his team. He arrived with high expectations after being the top goal scorer in the OHL this season, netting 57 goals.

On Friday night, the Monarchs beat the Adirondack Phantoms 4-1 behind the stellar play of goaltender Martin Jones.

As they begin their AHL Playoff run this year with a first round series versus the Binghamton Senators this Thursday, the coaching staff has a tough choice – Zatkoff or Jones?

In brief, the season began with Zatkoff as the starter. Jones outplayed him in the middle part of the season and ended up earning a spot in the AHL All-Star Game after going 14-3-0 in his first 20 games with a 1.75 goals-against-average and a .943 save percentage.

Then, Zatkoff came on strong in the second-half, earning the AHL Goaltender of the Month for March with a 5-3-1 record, a 1.55 goals-against-average, a .949 save percentage and two shutouts.

Obviously, having those two guys vying for the spot isn’t a bad problem to deal with.

MM: You debuted a new mask recently (pictures here).  People always want to know, what was the inspiration for the design?

MJ: I’m really not too picky. I used the same guy who painted my first one (this season). He did a great job with the first one, so I just said ‘Make me a cool mask.’

MJ: Pretty much. I liked the Monarch on top, which he did for the first one. I also liked the old LA Kings logo (Gretzky-era logo). So, I asked him to work that in if he could. He does a lot of great work. After seeing what he’s done for Zatts (Zatkoff) and some of the other Kings, I really like them. I have a lot of trust in him, I guess. Some guys are pretty picky about it, but that’s not really my style.

MM: How easy has the transition been to Manchester this season and has it helped at all to have Brandon Kozun there (they were teammates the last few years with the Calgary Hitmen / WHL)?

MJ: I think with our team, we have so many young guys and we have a lot of junior players on this team, they’ve been through it all and they can help you out. It’s easy when you have a young group of guys and you’re a young guy coming in – it’s easy to kinda fit in. So, it’s been easy from that perspective. The transition is pretty much what you expect though – it’s a lot faster and guys can shoot the puck harder. I think the main thing for a goaltender is just getting adjusted to the speed of the game.

MM: Speaking of the junior guys, go back to the training camps here in Los Angeles the last two summers – talk a little bit about the awkwardness of having some of your former WHL rivals as teammates (i.e. Jordan Weal of the Regina Pats) and the pressure you’ve experienced at those camps…

MJ: Yeah, it’s a tough situation getting new guys together. Obviously, you haven’t played a game for three months throughout the whole summer. So, it’s a little different. You definitely want to show your best at those games – especially me. We did have a lot of junior guys and we were playing against a lot of other top junior guys and even some guys who had played pro for a couple of years. So, it’s definitely a good learning experience. Regarding the (junior guys), I guess it’s a little bit of a unique experience after playing against those guys all year in junior. But, one of the great things with hockey players is there’s a lot of mutual respect. You can work hard against guys in a game, compete and hit and fight and all that stuff – but, at the end of the day, you can still respect a guy and be friends with him outside the rink.

MM: Coming into the season Zatkoff was expected to be the starter there, with Bernier moving on to Los Angeles. You’ve put up exceptional numbers, made the AHL All-Star team, etc. Yet, what’s it been like to live with the guy (Zatkoff) you’re battling for the job?

MJ: I think one of the great things about our tandem is we’re genuinely rooting for each other. We want each other to play well. It makes for a much better working environment when you’re both pulling for each other. Whoever is playing is playing and the other guy knows that he’s going to get his chance to play. We’re pulling on the same end of the rope here.

MM: The Kings have a strong tandem here is Los Angeles with Quick and Bernier. For those that haven’t seen you play much, if you had to compare your style, which of those two would you say you’re more similar to?

MJ: I don’t think I’m too similar to either of them. Quick is a little bit more athletic and kind of does whatever he has to do to stop the puck. Bernier is a little more technical. I’d say I try to make my own style.

And carve his own path through a crowded goaltending depth chart.

Did I actually just write that?  After 40+ years of it almost always being the organization’s weak link?

Regardless of what happens in the playoffs, both situations look pretty solid for the foreseeable future.