You are here: Home / comments / Dustin Penner is a man of few words these days 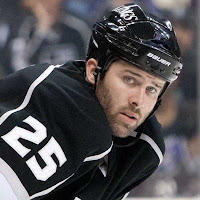 Ah, it was a much simpler time.

All the way back to February 28th.

It was partly a sign of confidence in what his hockey club was capable of doing down the stretch and equally necessary given the lack of scoring that plagued the team all year long.

Now, he’s being labeled a bust, if not worse.

Which made it was almost sad to talk to him after practice today. That quirky smile was gone, as were his witty answers.

MM: It’s gone from the high of highs when you first arrived here to the low of lows lately. How are you feeling overall with your play and what’s going on?

DP: I think frustrated. You know, just the same way most of the guys have felt over the last couple games – just frustration. You can’t put your finger on it sometimes. Tomorrow’s another chance to get back on track.

MM: How about bouncing around on different lines, has that been a problem for you?

DP: No. I think every coach does that, especially when things aren’t going well.  Maybe if I was a younger guy, a first year player, it would be different. But, we have to shake things up.

MM: Is it a chemistry thing – is there a particular player you’ve found more chemistry with?

DP: No. I don’t think it has to do with the other guys. It’s more my game.

If the Kings have any chance at mounting a comeback in this series, you would think Penner has to have a goal or two.

That is, of course, if coach Terry Murray even lets him play in game five tomorrow night.

He just needs a few goals and the smile will return.  So too will the fans, eventually.

Dustin Penner and the compounding pressure

Jarret Stoll on fight with Penner

Dustin Penner on his possible ‘out of body experience’