You are here: Home / comments / Coach Terry Murray on Jonathan – Quick vs. Bernier 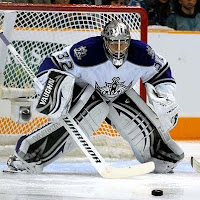 Jonathan Bernier.  How many times have Kings fans heard ‘He’s the goalie of the future’?

Yet, Jonathan Quick has owned the crease the last two seasons.

He should have been voted to the NHL All-Star Game this year, he wasn’t. And he was one of the team’s best players all year long.

Still, the questions keep coming. Before the playoffs started, coach Terry Murray was adamant though when speaking to the media – Quick will play every game.

He stuck to his guns too, even while his peer on the other bench – Todd McLellan – was swapping around his netminders like a game of three-card monte in attempts to change momentum.

Earlier today, I asked Murray if, in hindsight, he wishes he would have done the same…

Murray – “Absolutely not. Jonathan Quick played tremendous hockey. He gave us the opportunity to win. He did his job. You go back into it, you want to talk about 52 shots – well, hey, that’s your job. Stop the puck. That’s hard, cold – but, that’s a fact. You have to have your goaltender win a game for you. I believe in him and the goals that ended up going into the net in any one of those games that we can go back over, he did his job. We need to be better in front of him.”

Quick hasn’t received any respect around the league for two years. Why would it start now?

If you’re thinking about roster changes, expect to see Bernier gone before Quick. That’s not a knock on Bernier at all.  He played well this year.  It’s more a function of the Kings needing offense and having few tradeable assets at the NHL level.  We can get into that later though.

Clearing the Crease… with Jonathan Bernier

Evaluating the Rookies with Jonathan Bernier

Quick back to making history for the Kings