You are here: Home / comments / Cruising the Mall with Simmonds and Doughty 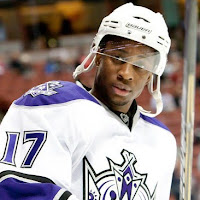 What’s the first thing Wayne Simmonds did upon returning to Los Angeles recently?

“I didn’t do much. I pretty much slept all day (Sunday). When you’re on a long road trip like that you don’t always get the sleep that you want. So, when you come home and you get that day off you use it to sleep.”

How about that off day last Friday? With the Kings based in Long Island, a few of the players chose to go into the city after practice.

“Some of the guys had friends and family in, so they were the ones that went back into the city. I didn’t,” explained Simmonds. “A couple of us just hung out and went to the mall and went for dinner there.”

Drew Doughty added “It was about 3:00 after practice and we wouldn’t have gotten into the city until about 4:00. So, we just decided to go shopping in Long Island.”

How does that work out, a couple of hockey players just cruising the local mall?

“Actually, we got recognized a couple times,” said Simmonds. “It was alright. I guess one of the salespersons helping us out recognized who we were and he just wished us good luck.”

As for the play on the ice, several teammates have talked about the Kings finding ways to grab points on the trip even when the team wasn’t playing its best at times (see below for links). Is that how they both see things?

“I thought the trip overall was pretty good, until maybe our last two games in New York. Those were probably our two worst I thought. But, we weren’t great in Columbus either. I thought of the games we played our best, one of them was Washington. We got four goals there…But, definitely, scoring is an issue with us right now and we have to fix it.”

Simmonds pointed more to the goaltending on the trip – “Sometimes that’s the way it happens. You’re not always going to get the bounces even if you’re playing well, like a strong 60-minute game. Like in Philly, I thought we played a strong game and we only got one goal and were lucky we didn’t give any up. Our goalies were great for us on this road trip, like they have been all year. Sometimes you don’t play the way you want to play and you squeak out the two points. It’s just how it works I’ve noticed over the last three years at times.”

No comment on who the third person was to join them at the mall. Perhaps it was New York fashionista Sean Avery or former LA sweater guru Alexander Frolov.

Willie Mitchell Not Sure What Went Wrong

Shooting It Out With Jarret Stoll and Coach Murray