You are here: Home / hockey / Kings Will (Probably) Get New Jerseys Next Season 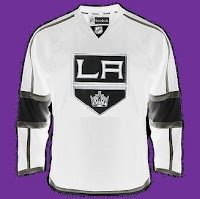 During Frozen Fury weekend last October I reported that some members of Kings management were informally surveying select fans in Las Vegas regarding possible tweaks to the current Kings jerseys for the 2011-12 season.

Additional fuel was added to the fire the following week when a report surfaced online featuring a picture of possible prototypes laying in Luc Robitaille’s office.

Things heated up again over the last few days as the new Reebok planning catalog started to circulate and it specifically mentioned the Kings as one of 11 teams considering a change for next season.

Well, from the ‘where there’s smoke there’s fire’ department, it was confirmed to me today by a source inside the organization that changes are indeed being considered.

The most likely scenario has the current third jersey converted to the primary jersey and being offered in a black/white version. A new third jersey would feature a crown and the color purple. The question is, will it be the current crown or the original one from the Forum days?

Since the Kings wore their purple and gold jerseys on opening night there has been renewed fan interest in merchandise featuring the logo and colors from that era. Thus, that’s a major part of the discussion taking place.

The league needs to be notified within in the next few months (believed to be by the end of March) if any jersey changes will be taking place in time for next season. However, the team is not obligated to release the information immediately following the deadline.

In fact, the official unveiling may not be announced publicly until June.

Either way, get ready – changes are probably coming.