You are here: Home / NHL / Kings / LA Kings vs Toronto Maple Leafs – When Mullets Were Cool 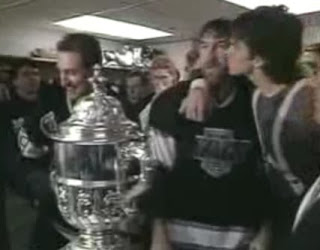 Toronto enters the game with 36 points, 13th in the Eastern Conference.  They’ll face a Kings team who won on Saturday for the first time in six games and now have 47 points, placing them 8th in the Western Conference.

However, when these two teams meet it will forever stir memories of an NHL playoff series from nearly 20 years ago.

1993 seems like so long ago – the NHL played an 84 game regular season schedule, the Ducks were still a movie not a hockey team, Eric Lindros and Teemu Selanne were promising rookies, wearing a helmet was optional for players, Ron Hextall was wearing a Quebec Nordiques jersey (seriously!), Gary Bettman was just named the NHL’s first Commissioner, Bruce McNall still owned the Kings and yes, mullets were cool.

Five years prior the Kings had made ‘The Trade’ with Edmonton to bring Wayne Gretzky to LA, turning Hollywood to Hockeywood. The Kings had their best year ever in 1990-91, posting 102 points and winning the Smythe Division. After losing to Edmonton that postseason and the year after though, coach Tom Webster was fired. 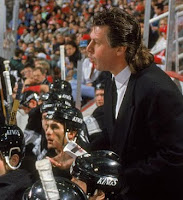 Then, prior to the 1992-93 season the Kings hired Barry Melrose – a Tony Robbins following, mullet wearing coach who had never been behind the bench for an NHL game. His star player, #99, missed the first 36 games of the season with a back injury. So, Luc Robitaille captained the team while he was out, en route to the best season of his career with 63 goals and 125 points. The team finished in 3rd place in their division with a record of 39-35-10, just 11th best in the 24 team league.

Fan favorite and starting goaltender, Kelly Hrudey, had gone through a horrible slump earlier in the year and still wasn’t right as the playoffs began. Down 2-1 in the series, Melrose replaced him with Robb Stauber. Hrudey described it like this to MayorsManor, “Robb played in game four and we won 2-1 to even the series. Barry stuck with him in games five and six…He won the series.”

Melrose kept Stauber between the pipes for the opening of the second round vs. Vancouver.

But, LA lost that match-up and found themselves down 0-1 in the series.

“Immediately following the game, Barry called me into his office and told me I was going to start game two,” recalled Hrudey.

The Kings went on to defeat the Canucks in six games, setting the stage for what came next…

Even though the Leafs had gone 2-1-1 against the Kings during the regular season, team leader Doug Gilmour didn’t take Los Angeles lightly, saying “We don’t want to get into a scoring match up with the Kings. We want to play them strong defensively and go from there.” Rookie goalie Felix Potvin agreed, adding “It’s going to be a tough series…they’ve got a wide-open offense…and we’re going to try to have to shut them out. We don’t want to get into a shootout with the Kings.”

There were also plenty of odd associations on both sides as well. Leafs winger Mike Krushelnyski had played two seasons for the Kings before being traded to Toronto a few years earlier. Plus, Toronto’s Glenn Anderson had played with Gretzky and Kurri back in Edmonton and felt the Kings were “very determined not only to get by this series against us but to win the Stanley Cup.”

Toronto’s captain, Wendel Clark, just so happened to be the first cousin of Melrose. Clark, who played a key role in most of the games, has since said – “That series was probably the most excitement I saw around here,” referring to Maple Leaf Gardens.

However, Melrose didn’t let family ties stand in the way of what he says “was one of the best series the NHL has had in the last 30 years,” adding “both buildings were electric, and both cities were unbelievable.”

Game 1 – While the Maple Leafs defeated the Kings 4-1 to take the early series lead, the real story of the game centered on a hit LA defenseman Marty McSorley put on Gilmour. Clark took exception to the hit and went after McSorley, in what became a series long theme (click here for video of the whole incident). The hit also enraged Toronto coach Pat Burns, who tried going after Melrose on the bench, convinced he ordered the hit on Gilmour. 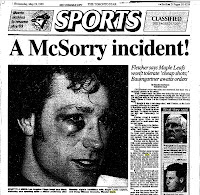 McSorley’s bruised face was on the cover of the Toronto sports page with a quote from Leafs GM Cliff Fletcher – “All I’m saying is (McSorley) may try (going after Gilmour), but it won’t happen again”.

The coaches were beginning their own war too. Burns began to take aim at Melrose through the media, feeling the Kings coach didn’t respect him or his team. After Melrose made a comment about the Leafs being good at protecting a lead because they have “10 guys 30 years old. They plug up the middle pretty well,” Burns retorted with – “We had 99 points this year, his team had 88. I guess our 30-year-olds did a pretty good job clogging up the middle. We beat Detroit and St. Louis, and I firmly believe we’ll beat the Los Angeles Kings, too.”

The war of words later escalated to Melrose commenting on Burns’ weight – even telling him to have another donut – while Burns would frequently call him Billy Ray Cyrus.

Looking back now, Melrose says – “Pat and I are both competitive guys. We’re both outgoing guys.”

He also adds, “We both talk a lot, and when you get both of those things combined…a lot of stuff is going to happen.”

Game 4 – The Leafs tied the series with a 4-2 victory at the Fabulous Forum.

Game 5 – In the first of back-to-back overtime games, Toronto won 3-2 when – with just 40 seconds left in the first overtime – Anderson whacked a puck out of the air to score.  The Leafs now lead the series 3-2 and the teams headed back to LA.

Game 6 – Prior to the game then-Toronto columnist Bob McKenzie noted that Gretzky was playing like he had a piano on his back throughout the series.  The story has taken on a life of its own in the subsequent years, as The Great One certainly used it for motivation that night.  He took to the ice and emphatically proved you don’t call out a legend.

Urban myth has it that Gretzky addressed the team before the game, asking each player to give it their all and tie the series.  He promised, if they could get the series back to Toronto, he would take care of things in game seven.

It almost never came to be though.

The Kings dominated the first two periods of game six and were up 4-1 early in the third. However, Clark scored three goals for the Leafs to even the game 4-4 and push things to overtime.

Early in the fourth period Gretzky high-sticked Gilmour for what Leaf fans will forever claim should have been a penalty. Referee Kerry Fraser disagreed and play continued.

From behind the net Robitaille set up Gretzky to win the game – Kings 5, Leafs 4.

Board the plane. Everybody’s going back to Toronto for game seven with a trip to the Stanley Cup Finals hanging in the balance.

Game 7 – In what will forever be known as ‘The Series’ among Kings fans and players, this was ‘The Game.’

Gretzky opened the scoring on a shorthanded give-and-go with McSorley to provide the Kings an early 1-0 lead. He then set up Tomas Sandstrom for a goal, putting LA ahead 2-0 at the end of the first period.

Toronto tied things up early in the second on goals from Clark and then Anderson. So, Melrose called a time out to settle things down.

At the half way point of the second period Gretzky was alone in the slot and put a slap shot past Potvin to give the Kings the lead again at 3-2. Just like the previous intermission, LA was leading at the break.

Clark scored his second goal of the game just minutes into the third period, once again tying things up.  Both teams rushed up and down the ice repeatedly for the next 10 minutes, yet neither side could find the back of the net.

Then, with just under four minutes remaining in the third, Kings forward Mike Donnelly scored on a rebound – off a shot originally taken by Alex Zhitnik – giving the Kings a precious one goal lead.

Seconds later, Gretzky ended up with the puck, circled behind the net and backhanded it off the skate of Leafs defenseman Dave Ellet. It went by Potvin and the Kings now had a two goal lead powered by 99’s hat trick.

The next few minutes probably seemed like an eternity to anybody pulling for the Kings.  And the stress of the situation compounded when Ellet got a small sense of redemption – he scored, cutting the Leafs deficit to one goal, with about a minute remaining in regulation.

The Los Angeles Kings won the game 5-4 and closed out the series, four games to three.

Gretzky has been quoted as saying that his performance in game 7 was the best NHL game of his career.

It’s hard to argue the point.

With a roster full of guys like Corey Millen, Gary Shuchuk and Pat Conacher, the Kings beat an original six team in the playoffs for the first time since they entered the league in 1967. (Oh yeah, they also had guys named Granato, Carson and Blake.) 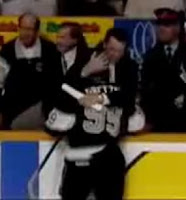 In two of the iconic moments in LA franchise history, Gretzky skated over to the bench after the game to give Melrose a huge hug (pictured at right) – and later in the locker room, Robitaille kissed Dave Taylor as they celebrated around the Campbell Conference trophy (picture above).

It truly was probably the greatest seven game series ever played and the mere mention of Kings v Maple Leafs will always bring back memories of that epic playoff battle.

UPDATE:  In related news, Kerry Fraser joined us for a special edition of the MayorsManor podcast – and, of course, the list of topics covered included the Leafs-Kings series from ’93 and the Gretzky non-call. Click here to listen to it now.