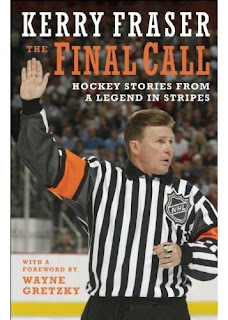 Very few people in the world of hockey ever become as well known as the players on the ice.

Then again, there aren’t many people like Kerry Fraser either.

He’s perhaps the most recognizable referee in the history of hockey. In his 30-year career he managed to get under the skin of fans in nearly every NHL city. Yet, he was simply doing his job in most cases.

At the end of last season he hung up his whistle after more than 2,000 games all across North America. He penned a book, The Final Call, while taking those last laps in stripes. It’s a telling memoir featuring candid insight and often provides the emotion behind stories fans may not have otherwise been privy to.

In the podcast below Fraser shares some of those memories. He talks about lecturing a young Mario Lemieux and the friction it created, allowing Mark Messier a little latitude when taking care of a situation on the ice and recalls a crushed Theo Fleury asking him for help.

Of course, he also talks about several key events involving the Kings – including the non-call on Wayne Gretzky in the ’93 playoffs vs. Toronto, Marty McSorley’s illegal stick in the Stanley Cup Finals, coach Tom Webster throwing a stick at him and quite a bit more.

He shares the experiences of receiving death threats, contemplates rule changes and offers opinions on calling penalties in the final minutes of play.

Like many MayorsManor interviews, we also play word association and you may not believe what he has to say about guys like Gary Bettman, Chris Pronger, Sean Avery, Patrick Roy and several others. The most shocking though may be his comments on Alex Ovechkin.

Take a listen using the free player down below.