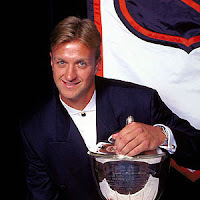 It’s been a while since we’ve done a High / Low piece, one of our popular features during the regular season.

It’s also been a while since there’s been any new Rob Blake news around these parts…again, also popular during the regular season.

With Rob’s recent retirement, he’s been in the news a little this summer. Yet, let’s face it, within a certain subset of Kings fans he’s always top of mind…for some reason or another.

Rob was kind enough to first stop by MayorsManor back in January for an in-depth interview, covering topics like being drafted by the Kings, going to the Finals in ’93, the trade, resigning the captaincy, coming back to LA and several other items.

Today we look at the highs and lows of his career – in his words – and play a little word association with the 20-year NHL veteran – you’ll get to see what he has to say about Zhitnik, Sandstrom, Robitaille, Carson, McSorley and many more of the guys he laced ’em up with.

Blake played in over 1,200 regular season NHL games, finishing with 240 goals, placing him 10th among defensemen on the all-time list.  He was a six-time All Star, won a Stanley Cup in 2001 and the Norris Trophy in 1998.

While playing for Team Canada at the 2002 Winter Olympics he became only the 11th player in history to gain entrance to the uber-exclusive “Triple Crown Club” – reserved for owners of the three most prestigious titles in hockey:  the Stanley Cup, a Gold Medal at the World Championships and an Olympic Gold Medal.

Thus, there’s a lot to choose from when selecting the key highlights of Blake’s accomplishments on the ice.  So, how about he does it for us…

Rob, what would you say were the three highs and lows of your career?

1 – Playing my first game in the NHL, that was definitely a high point for me.

3 – Being named captain of a team at 40 years old.  That’s something I didnt think was going to happen again.

I don’t really have any lows. There are days that are tough and there’s times that are tough. But, that’s what it’s all about. I couldn’t ask for anything more. I’ve wanted to be an NHL player from day one and to have that opportunity has been pretty amazing.

How about some word association – mainly with some of the guys you played with in Los Angeles, but we’ll drop a few Sharks too…

Alex Zhitnik – fun to be around

Darryl Sydor – worrier, he worries about everything

Wayne Gretzky – the greatest player to ever play the game

Dan Boyle – one man breakout…he does it all by himself, he’s unbelievable…I don’t know how he does it

There you have it…more candid thoughts from the only Kings player to ever win the Norris Trophy (yes people, for now…).

Although Blake’s career on the ice is over, where he goes from here is still undecided.  Coaching, management, broadcasting are all options.  And, of course, eventually he’ll be making a trip to Toronto for enshrinement into the Hockey Hall of Fame.

Until then, the debate rages on…should Kings fans love or hate #4?