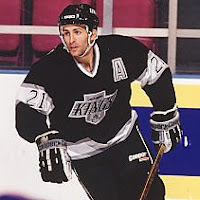 When evaluating a trade in sports years down the line if you’d still make the same trade again, that usually tells you which team won the exchange.

In the case of the Kings sending Bernie Nicholls to the New York Rangers for Tomas Sandstrom and Tony Granato, of course they’d do that deal again.

The offensive duo helped propel the Kings to new heights in the early ’90s, including a trip to the Stanley Cup Finals in 1993.

These days Granato is an assistant coach with the Pittsburgh Penguins. In the podcast below we cover a wide range of topics…

On coaching, Granato talks about what it takes to be successful in the current NHL, what he learned from Barry Melrose and if he was ready to be a head coach when the Colorado Avalanche hired him.

Regarding his days on the ice, he talks about playing in New York with Marcel Dionne, being traded to LA and the Kings 1993 playoff run – including the Marty McSorley stick incident.

Other topics explored feature travel challenges in the Eastern vs. Western Conference, Staples Center vs. the Forum and choosing his jersey number.

As if all that isn’t enough, Granato also weighs in on the ‘Should Rob Blake’s number be retired in LA?’ debate.

A few other quick notes before we get to the chat with Granato though:

– All MayorsManor podcasts are now available via a free download on itunes.

– There were two supplementary articles published this week with Granato. First, he talks about this year’s Kings team and GM Dean Lombardi from his days in San Jose (linked here). Second, we play word association using many of his former teammates, a MayorsManor favorite (linked here).

Now, onto Granato. Hope you enjoy the conversation…