You are here: Home / NHL / Kings / More notes on the Kings, the Dodgers…and MY TOWN! 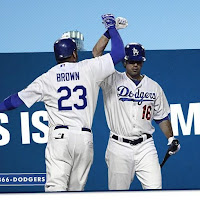 A few other notes on the game tonight:

* Chad Billingsley pitched for the Dodgers in the first game of this cross-town love fest back in August of  2008. He’s back on the hill tonight when the Dodgers take on the Cubs during Kings Night at the Stadium.

* Last night was the anniversary of a rather momentous occasion at Dodger Stadium. It was 30 years ago yesterday that the Dodgers unveiled their then-state of the art scoreboard known as Mitsubishi Diamond Vision when they hosted the MLB All Star Game. Fans might take things like this for granted now, but it was the first video board of its kind. Coincidentally, the Kings are rumored to be getting their own state of the art scoreboard this summer, with an upgrade to HD. We shall see.

* For the “We miss the Forum'” crowd, you’ll like this – remember that Gary Glitter song “Rock and Roll Part 2” (some call it the “Hey” song)…while the Kings don’t play it anymore after a goal, the Dodgers still do after an LA slugger blasts a homerun. Go to the baseball game tonight and you may be able to get your HEY! out.

* Ilya Kovalchuk is not expected to attend the game, either as a fan or as a member of the LA Kings.

* Tickets in the MY TOWN section are still available.  The package deal includes all you can eat food and a pretty cool Kings-inspired Dodgers t-shirt.  Click here for details.

While Staples Center may be my home…when it comes to LA, THIS IS MY TOWN!

Click here to read the part one of the Kings-Dodgers article, covering the history of their relationship.