You are here: Home / draft / Draft 2010 – Interview with Calle Jarnkrok 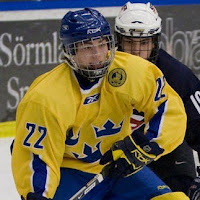 History is important.  That’s why they make you take it from grade school through college.  It’s a critical building block of knowledge.

Things aren’t much different in sports.  Hockey fans need to know their history.

When it comes to the LA Kings and players from Sweden, there are three names you need to know – Mattias Norstrom, Tomas Sandstrom and Peter Forsberg.

Sorry Freddy Modin…nice audition you put in for a few months this season, but we’re going to need to see a greater body of work for you to be included in this conversation.

Much has been made about the Kings-Red Wings rivalry during the first few years after the team moved into Staples Center to start the decade. Somewhat lost in the shuffle for many is their equally intense rivalry with the Colorado Avalanche.

After the Frenzy on Figueroa in ’01, it was the Avs that took out the Kings in the second round (needing 7 games to do it). The following year it was another 7 game series with the Avs…and another loss for the Kings. Forsberg was front and center for the Avs during this period. He was a Kings killer.

For somebody actually wearing a Kings jersey, there is Norstrom. Having recently served as an Assistant Coach for his native country in the Vancouver Olympics, he hasn’t strayed too far from hockey in his post-retirement life. He wore the “C” for 5 seasons with the Kings and was simply known as “the Warrior.”

Which brings us to perhaps one of the most underrated and under-appreciated Kings of the Gretzky era (or the McNall era, if you prefer), Sandstrom. You wanna talk warrior? This guy had his leg broken in game two of a playoff series vs the Oilers in ’91 (damn you Craig Muni!). That’s fine though, all Sandstrom did was come back and play six nights later…ON A BROKEN LEG!

Those early ’90s teams were loaded with stars like Gretzky, Robitaille, Granato, Blake and Hrudey. Yet, it was the guy Don Cherry would call a Chicken Swede and say his play on the ice was more like ballet than hockey…yes, it was Sandstrom that was the straw stirring the drink in those years.  Their record with him in the line-up was something like 212-23 and a pathetic 14-127 without him.

OK, fine…maybe it wasn’t quite that extreme.  But, believe me…if you weren’t there, study your history.  These numbers are real – he had 254 points in 235 regular season games while playing right wing for the Kings.  And in 50 playoff games with the team he had 45 points.  Tomas Sandstrom was one hell of a player.

Which leads me to this…

Among the many kids that might still be available when the Kings draft at #19 tomorrow night could be Swedish center Calle Jarnkrok.  Then again, he could be scooped up already by another team, as NHL Central Scouting had him ranked #4 with a bullet in the final log of European skaters, moving up from #21 at the mid-term rankings in January.  TSN, on the other hand, has him going more likely in the third round.

Either way, throughout the week The Mayor has already visited with Americans, Canadians and a Russian.  It was time to show some love for the Swedes…in honor of Norstrom and Sandstrom.

However, given Jarnkrok’s size (5’11”) he might be more comparable to current Kings prospect Oscar Moller (a 5’10” Swede) – so, we’ll make this in honor of him too.

Let’s get this thing started…

The development of European players can be different than here in North America. What differences do you see?

It’s hard to say because I have never really been in North America (before), but when we play the North Americans in international play, North American players all play the same style of game. They are like robots or machines.

Speaking of international tournaments, how important is it to you to play in the next World Junior Championships?

Yes, it is something that is very important to me. To represent my country in such a huge tournament would be a great honor.

Talk about what it means to you personally to wear the sweater of Sweden?

It’s an honor to represent my country and I am proud to do it every time I am asked.

Who got you started in hockey and what is your earliest on ice memory?

My father (Tony) got me started in hockey. My first memory is when we play scrimmage on the pond in Gavle. We played side to side, not up and down the ice. My best friend, Anton, who is here with me this weekend was also there on the ice.

Some draft experts have you going in the first round. Is that something you’re aiming for?

Yeah of course I aim to go in the first round but it doesn’t really bother me too much. My aim is to make it to the NHL. If it means not having to do interview on TV I would rather go in the second round (laughs).

Assuming this is your first trip to LA, what are you most looking forward to seeing or doing in Los Angeles?

Hollywood and seeing all of the Escalades. Also, seeing the LAPD police cars which are very famous on TV.

They all tell me that I need to get stronger.

There were not very many teams that were too tough. They were pretty easy to me, I think.

Any pregame rituals or superstition?

NO pregame ritual or superstitions. Not the same meal and no nap. Just get ready for game.

Lance Ward. He played for HV 71 and is very physical and strong.

If you received a phone call saying you had to leave your house in five minutes and could never go back…what three things would you have to take with you?

My XBox. My bed. My computer.

Mats Sundin. Because he was better, I think.

LA Dodgers. Because everyone in Sweden goes around with Yankees hats, without knowing the team or the players. My team is the New York Mets.

What takes up a lot your time outside of hockey?

Golf and studying for my drivers license.

Ironhook. That is what my name means in English.

If you had to pick one player as your biggest rival so far, who would it be?

I’m not that kind of a player or person. I just worry about playing my own game and helping my teammates try to be the best.

#22 because I always wore it when I was growing up.

Ironhook has arrived in LA folks and he brought Anton with him, part of his posse back home.

You kids stay outta trouble while you’re in town this weekend, ya’ hear? Admire those police cars from the outside, not the inside.

And if things work out right at the draft, Calle can by an Escalade for you guys to roll around in, sportin’ your Mets hats.  He’ll just need to get that driver’s license first.

Serioulsy though, scouts say Jarnkrok is a smart kid and an exciting player. He’ll also be racing his linemate back home – Ludvig Rensfeldt (ranked #5 among Europeans) – to be the first Swede taken in this year’s draft. Good luck ‘hook.

Just know that if you’re selected by the Kings, we may ask you to change your name to Jarnstrom.  We’re big into the ‘stroms.