You are here: Home / draft / Draft 2010 – Interview with Brandon Archibald 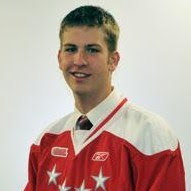 Two truisms in sports that are rarely proven wrong.

In this prospect profile we introduce you to a Brandon Archibald – a 6’4″ American born defenseman who plays junior hockey with the Sault Ste. Marie Greyhounds.  Currently ranked 64th by NHL Central Scouting, he hopes to someday parlay his size and skill into helping an NHL team win the Stanley Cup.  Once again giving credence to the above axioms.

He reportedly drew interest from big time college hockey programs like Wisconsin, Notre Dame and Michigan State. Ultimately, he signed with the Soo, where he just completed his second full season.

In his rookie season he had 8 points in 61 games and was named the team’s Co-Rookie of the Year. He found the ability to add some offense to his game this past season, picking up 33 points in 68 games.

If you’re only as good as the company you keep, he’s doing just fine. His primary defensive partner was Kings prospect (and OHL Defenseman of the Year) Jake Muzzin. And another member of that team’s d-core is Brock Beukeboom, who is also expected to go in the first half of the draft this weekend (we’ll have an interview with him up sometime tomorrow).

To balance all the hype, it should be noted that Archibald’s draft combine scores for fitness were not at the elite level.  Not saying he isn’t in good shape, only noting that he placed in the top-10 in only three of the 31 tests given. What does that mean about his ability to play in the NHL? Nothing.

It’s widely expected that this draft will be a real coming out party for American born players.  Archibald looks to be part of that high-end U.S. contingent – having already played for Team USA internationally, he was invited to attend the upcoming World Jr evaluation camp later this summer.

Playing for the Soo, it’s such a storied franchise – from Gretzky, to Joe Thornton, the Memorial Cup games…do the players talk about the mystique of the organization back in the ’80s and ’90s?

I wasn’t even born yet.  But, players do talk about the (history of the) franchise, as well as the coaches who played with those players and won those cups.

You’ve said you really wanted to go to college prior to your agent opening your eyes to the OHL. Was their a particular school you were hoping to attend? If so, what was the significance?

I really took a long look at Michigan State and Miami of Ohio. When it came down to deciding where I wanted to go, the number of games the OHL plays vs. what college plays sent me to the O.

You’ve been pegged as a defensive specialist who can play a lot of minutes…as such, what stats are most important to you – ice time, +/-, something else?

Wins and losses are the most important. If you have team success, then individual success will come. After that, you obviously want to be the player you are meant to be. Keep your plus-rating up and contribute offensively when needed.

Conversely, what do you think is the most useless stat in hockey?

Plus-minus I believe to judge a player on how he is, it’s a useless stat. A kid jumps on the ice and the other team scores and he wasn’t even involved in the play?!?  I don’t believe you can give them a bad stat because of that.

Draft experts can’t seem to agree on when you’ll be selected in the draft. What are your expectations for next weekend?

It’s very tough to say. It only takes one team to like you enough to draft you, so it could be second round and it could be sixth. My main goal is not to be drafted but to play in the NHL.

How do you feel about your scores coming out of the combine? Of course, you always want to do better…however, overall, did you perform how you wanted?

I felt I did pretty well at the combine. Obviously, it showed me that I need to become much stronger and I plan on working on that over the summer.

Pittsburgh. They had some very difficult questions.

You were invited to the upcoming USA camp for the next World Junior Tournament. Does having those games in the U.S. (Buffalo, NY) mean anything special to you or would you be just as excited going somewhere internationally?

Well first I need to make the team, that’s my main focus. But having the games in the U.S. makes me want to be on that team a lot more, in an attempt to win gold on home soil.

Sticking with Team USA for a second, you’ve played with a large number of the American players that are expected to be drafted next week. In your opinion, who is the best forward and who is the best defenseman of that group?

Austin Watson is one of the best forwards in the draft, no question. As far as defense goes, I don’t think anybody can pass on Cam Fowler.

What’s your preference for regular season games – shootout or overtime?

Playing golf, hanging out with friends.

Soccer, I just can’t get into it.

I’ve never been told I look like anybody! (note: we’re going to have to change that when he’s here this week…he has to look like somebody, right?)

Somebody, somewhere taught him something though.  The kid seems to have a good head on his shoulders and understands life is about taking steps forward…one at a time.

Best of luck to Brandon this weekend as he takes the next step towards reaching his dream of playing in the NHL.