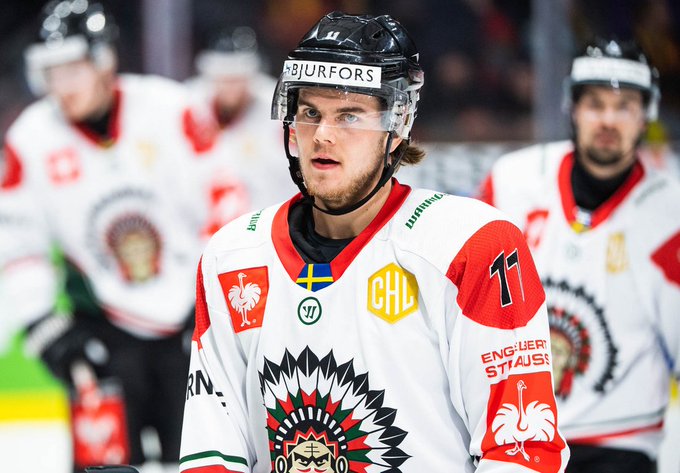 While the parent club concluded another leg of the regular season up until the all-star break, future Kings and hopeful professionals continue in their own respective leagues.

The Swedish speedster was held off the scoresheet in the SHL. In CHL action, he picked up an assist in, which helped push the Indians to a 3-1 win in a rematch. Due to goal differential, Frölunda advanced to the CHL final against Czech Republic’s Mountfield – currently managed by former Kings player Jaroslav Bednar. Mark your calendars for February 4, when the two teams are scheduled to meet.

One of our honorable mentions had a quiet overall week, as he failed to put up a point for the Indians in three games played.

There was no movement on Nousiainen’s numbers this week, as he was out with the flu. We expect him to return by the end of this coming week.

The Russian forward has not yet returned to action since November, and there are currently no updates to his return.

Doyle played one game this week, and he didn’t register a point. He was on the ice for the lone goal against, a short-handed goal, where he was unable to muscle the would-be scorer off the puck.

Perhaps the Slovak stopper was more motivated than usual this week, since he lost to Minnesota-Duluth in the NCAA Championship last year. He made 59 saves on 60 shots over the weekend, and one such bout was a 27-save shutout.

While Penn State was blanked in their first bout against Michigan, Hults picked up a helper on the game-tying goal in the dying minutes of regulation in game two. He’s also earned himself a bit of an iron man reputation, as he has not missed a game since putting on Penn State gear.

Junior @ColeHults hasn’t missed a game since stepping foot on campus and tonight he will be playing in career game No. 1️⃣0️⃣0️⃣!! #WeAre #HockeyValley pic.twitter.com/9QRtxNkPS2

Andre Lee’s scoring streak extended to three games, picking up a goal and two assists. One such helper this week was less than two minutes into the bout, as he battled with a defender to free the puck so his line mate could break in and score.

Andre Lee with a pretty goal to make it 4-1 #RiverHawks pic.twitter.com/b2Xz8XsI6I

Turcotte had another weekend where he failed to put up a point, but as usual, it’s not from lack of effort. He’s often lined up with Cole Caufield and one of Dylan Holloway or Linus Weissbach, and he has set up Caufield multiple times. The line was sent out frequently after generating momentum for the Badgers, but the scoring has just not been there. Turcotte’s last goal was November 9, and he has just one assist in his past 10 games. He received what looked like a headshot, but he didn’t miss any time as a result of the hit.

Not the greatest look at this one, and I'm guessing the referees had other angles to watch, but this is the hit by Michigan State's Cole Krygier on Alex Turcotte on Saturday that the #Badgers challenged for head contact. No call after replay. pic.twitter.com/lctac3WHvh

Owen Sound has been keeping their collective heads above water in the standings, as they are tied with Erie for the bottom two playoff spots. Dudas has contributed an assist in his efforts, helping the team to a 2-1 record this week. He found other ways to have fun since our last update.

Little pregame dance off last night in Guelph between @AidanDudas and a big Attack fan!

Only fair that the winner gets a puck. pic.twitter.com/eC7YcQEGdk

Ingham saw his individual numbers take a mild hit when he allowed seven goals in the two games he played this week. Both performances were victories, so the team benefited as a whole.

It was an uncharacteristically quiet week for Kaliyev. One game was rescheduled due to issues with the ice system. In the one meetup with Ottawa, the sniper found himself penciled on the third line to start. He didn’t score, and Hamilton was blanked by the 67’s. He hasn’t had a scoring drought longer than a game this season, so look for him to get back on the scoresheet soon.

#OHL: Still working on this HAM-OTT first period and Jan Mysak connects with Arthur Kaliyev (LAK 2nd/2019) on the PP. With Kaliyev's release on that kind of a setup, 50/50 that puck is already in the net. pic.twitter.com/9F5JaQyUTI

The native of Czech Republic had a forgettable week, unfortunately. He found himself chased out of the net early in the second period, then let in four goals en route to a 5-3 loss in his next opportunity.

A steady presence on the blueline is just what the doctor ordered for London, and Phillips is the prescription. The Knights have rolled to a 4-1 record since acquiring the native of Toronto, Ontario, and they’ve held the opposition to two goals or less in four of the games. Phillips was not brought in to be a scorer, and his revitalized style as a stay-at-home defenseman has been key to bolstering an already strong roster.

Three points in a game isn’t common for defensemen, but Spence had his first three-point performance since Halloween. For the first time in his career, he potted two goals in one contest.

Since Thomas’ trade to Peterborough, he has been a valuable asset. He picked up a goal and ten assists in four bouts, having a hand in 58% of the team’s scoring. He’s riding a five-game scoring streak, which started in his tilt game for Niagara. During that streak, he’s tallied four times twice.