You are here: Home / NHL / Avalanche / Behind the Scenes: Creation of the LA Kings 2020 Outdoor Jersey Jersey leaks are part of the game. At MayorsManor we’re proud of the fact we’ve broken the news on every jersey the Kings have launched over the past 10 years. However, a leak doesn’t always tell the whole tale of how a jersey evolves from a rough idea to an actual sweater worn by NHL players. And when it comes to next month’s outdoor game in Colorado Springs, this is one of those rare times where the picture alone doesn’t truly convey its thousand words. There’s a much bigger story at play here, one that deserves to be told in its entirety.

“We’ve had the honor of playing in three of these Stadium Series games,” AEG Sports Chief Operating Officer Kelly Cheeseman proudly stated during a recent conversation about the game and what the Kings will wear once they hit the ice. “With this very unique jersey, and the overall uniform kit, we were striving for something that was truly worthy of what will be a special game in a special location. We’re beyond lucky to play hockey there and wanted to do something worthy of the honor.”

Given the NHL now produces a handful of outdoor games each year, it can be difficult to find a meaningful hook for each matchup – or at least one that doesn’t feel forced or manufactured. For the Kings first venture outdoors the very idea was enough to draw interest, as the game was played on the famous Las Vegas strip. Decades later, they skated outside again, but this time at Dodger Stadium, one of the most storied venues in all of sports. Merely stating the Kings and Avalanche will play at the Air Force Academy next month is far too simplistic; one that misses the emotions attached to something carrying deep meaning to Kings management. With work going on being the scenes for more than a year, this is something they’ve been eagerly waiting to share with the fanbase.

“Even before the game was officially announced, and things were headed toward us being included, we had already started thinking about what we wanted to do with the uniforms,” Cheeseman explained. “We always have a longer term view of what we want to do with the uniforms, based on the brand. When you get into these specialty games — the Stadium Series games and such – we always try to think a little bit more creatively because they’re one-off jerseys. We try to do something special that honors the particular moment.”

For the upcoming game at Falcon Field, finding inspiration was quite simple. This wasn’t going to be about just the Air Force Academy, they wanted to extend the vision to include all branches of the military. One of the reasons AEG ownership pushed so hard to be included in this specific outdoor game was not only because of their strong ties to Colorado, but a larger desire to honor the hundreds of thousands military personnel who live in the area, along with all those back in Southern California. Plus, with the Kings being so deeply rooted into the South Bay communities, it was only natural to think of the local area’s longstanding connection with the aerospace industry.

More specifically, the Kings quickly began heavily researching production of the North American P-51 Mustang to aid in their inspiration. It was a single-seat fighter plane primarily used during World War II. Why this specific plane, though? Not only is it widely considered to be the best American fighter of WWII – accounting for almost half the enemy aircraft destroyed in Europe during the conflict — it was also manufactured in Inglewood and El Segundo. “We wanted to come up with a complete military focused concept that was based off of this inspiration,” Cheeseman continued. “Pretty quickly, we knew what we wanted to do with the helmet, so it was about aligning the concept together with the creative. We worked with the league and Adidas to get the ultimate outcome.”

Again, this is more about the overall uniform kit, not so much just the one-off jersey.

It all starts with a truly customized silver, almost chrome like, helmet adorned with military inspired numbers and additional military insignia used to tie things together. Every detail was meticulously curated, down to the chrome helmet aligning with the actual markings from a P-51 Mustang.

“We started our research online, and then we began talking with various family members and season ticket members,” he added. “Aerospace has such a long history in this town; you can’t walk five feet without finding some sort of connection to the industry. Most of those people are strong historians for what’s been done. We were able to build off of the details they provided. The helmet is so unique. We don’t think there’s ever been anything done like it in the NHL before.”

They even went so far as to have somebody bring an actual P-51 Mustang to the Torrance Airport so they could further study the plane in its three-dimensional form. 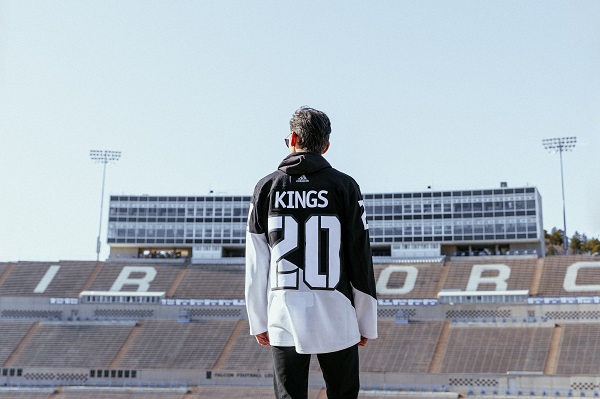 For those holding out hope that purple would somehow be included, sorry, the color simply didn’t fit the project scope. There wasn’t some masterplan in play to avoid that part of the team’s past.

“We were very focused on the markings and alignments of our brand with the P-51 story and it just didn’t work,” replied Cheeseman, when purple was brought up during our conversation. “This is not our primary jersey, that’s an important part of the story.”

Even so, there are several components of the jersey that allowed the creative team to incorporate other elements from both the Kings past and present, while keeping the military inspiration front and center. Essentially, two key eras of the Kings organization are featured on the jersey design. The lettering on the front crest includes the speed lines from the Gretzky-era Kings logo, while simultaneously utilizing the ‘L.A.’ font that’s been used for the past 20+ years, including on the team’s three current jerseys. It all aligns with the overall military concepts they wanted to focus on for the 2020 Stadium Series game.

Several Kings players were able to get a sneak peek of certain pieces of the kit as it was being finalized over the summer – with universal praise and intrigue surrounding the helmet. Yet, for guys like Anze Kopitar, Dustin Brown, and Drew Doughty, who participated in the 2015 Stadium Series game vs. the Sharks in Northern California, there is a separate aspect of this year’s kit they will likely find equally appealing.

No, the Kings won’t be wearing white pants this time around.

They will, however, suit up with white gloves in Colorado Springs, trimmed with some silver. Socks will have a similar treatment. This was due, in part, to feedback from team equipment manager, Darren Granger, and his staff. They helped fine tune the overall package once a majority of the helmet and jersey design had come together.

For fans not traveling to Colorado who want to see the military inspired Kings jerseys up close on the ice, there will be one opportunity later next month. When the New Jersey Devils visit Staples Center on Saturday, February 29, the Kings will wear their 2020 Stadium Series uniform kit.

“What we tried to do was have an overall kit that included some history and heritage; one that not only honored the people who flew these planes, but also the men and women who designed and manufactured them, as well,” said Cheeseman. “We wanted to make sure we brought in all the reasons and had that connection to why we’re actually playing in this game at the Air Force Academy.”