Despite dominating the shot count, time of possession and pace of the game, for the second night in a row the Ontario Reign could not secure a win. It was deja vu in overtime, as San Antonio captain Ben Street netted the game winning goal, just as he had done on Friday. Even so, Ontario remains undefeated in regulation, while Head Coach Mike Stothers chooses to view the back-to-back missed opportunities with a glass half-full mentality.

“I thought we played well again today. We didn’t win the 3 on 3 last night and we didn’t win the 3 on 3 tonight. You can dwell on it, but I prefer to be positive. We battled a good goaltender, we scored late and tied it up and we got another valuable point. If we can continue to find ways to generate points, at the end of the season that’s how you accumulate what you’re looking for.”

Stothers pulled goaltender Ray Emery, who was making his season debut, with nearly two minutes left in the game. After a couple of setups in San Antonio territory, Michael Mersch forced the puck on net. The rebound came to Sean Backman, who quickly moved behind the net and then moved the puck to Adrian Kempe. The LA Kings prospect made a nifty behind the back pass to underrated defenseman Kevin Gravel, who blasted a puck that tied the game at 1 with just 44 seconds remaining in regulation.

“One thing that coach Stots preaches is even-keel,” noted Gravel, when speaking about how the Reign were able to stick with their gameplan after going behind early. “We get scored on or we score, nothing changes; especially when you get scored on 20 seconds into the game. You still have the entire game to come back. We needed every second of that tonight, but eventually we did come back and fought out a point. Obviously you’re looking to get the second point but a point is a point. At the end of the year you’re a point out of it or a point into it.”

The best forward line for Ontario was the Mersch-Dowd-Zykov line. While they were not the only line that created offensive chances and possessed the puck, they did it with a certain dominance that seemed to set the tone for the rest of the lineup. They have been leading in the scoring department as well, combining for 13 points in the 6 games coming into Saturday. Center Nic Dowd has picked up a much larger role than he had on the Calder Cup winning Manchester Monarchs team last season, an opportunity he is glad to have.

“I’ve been fortunate enough where I’m getting to play a lot of minutes and the power play and i think that’s going to help,” said the former college hockey standout.

He also spoke about figuring out how to create some cohesion between him and his linemates.

“Ive been playing with good linemates this whole time,” Dowd added. “Mersch an Zykov are finding their way too so i think its a learning curve for everybody now matter how long youve been in the league. I think were starting to figure each other out a little bit more. I know ive got to get the puck to Merschy down low because hes good from the goal line to the crease. Z likes to shoot the puck and i like to pass so were figuring it out a little bit more.”

Ontario’s record moves to 5-0-2 after the overtime loss. Players are hopping on the bus to San Jose where the Reign will face a team that hasn’t played a game since they lost to Ontario 3-0 on October 24.

For an extended collection of pics taken during the game by MayorsManor photographer Chasen Ikiri, check out the collection below. 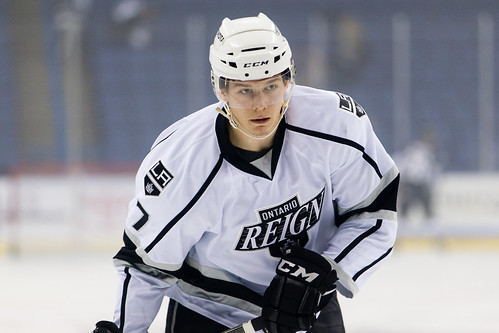