You are here: Home / AHL / LA Kings sign one of the top college hockey free agents 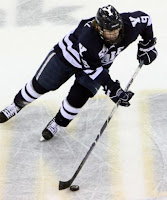 In something that’s becoming quite the norm around this time of year for Kings GM Dean Lombardi, he added another college hockey free agent today.

Forward Brian O’Neill, who just finished his senior year at Yale, has reportedly signed a one-year deal with the team. According to reports, O’Neill was offered a similar deal last year, but chose to return to college for his final season.

Over the last three years, O’Neill has been remarkably consistent, scoring 45, 46 and 46 points. He also picked up a hat trick last February against Clarkson – where Dave Taylor and Willie Mitchell played their college hockey. This season, he posted 21 goals (one better than his previous best from last year) in 35 games.

Some additional highlights from his NCAA career:

– As a freshman he only missed one game and led all newcomers with 12 goals and 26 points.

– Last year, he was a first-team All-ECAC player and led the Bulldogs in goals and points.

– After finishing his college career with 163 career points, second best in Yale history (Jeff Hamilton had 173), his coach Keith Allain told the local paper, “As the total package, I can make the argument that he’s the greatest player in Yale history…In terms of what his teams produced, leading the team in scoring three years in a row — and he’s so much more than just a scorer. I could go on and on about the contributions he’s made to our hockey program.”

On a side note, the kid appears to have personality too – he was voted “most humorous” by his Yale teammates

The 5-foot-9 Ivy League Player of the Year is apparently on his way to Manchester (AHL) today for practice and will make his pro debut on Saturday vs. the St. John’s IceCaps.

UPDATE: O’Neill did not make it to Manchester in time for practice today.  However, he is expected on the ice for Thursday’s session and  we should have an interview with him up on MayorsManor shortly.

NOTE: Information from the Yale University website, including the photo, was used to prepare this article.