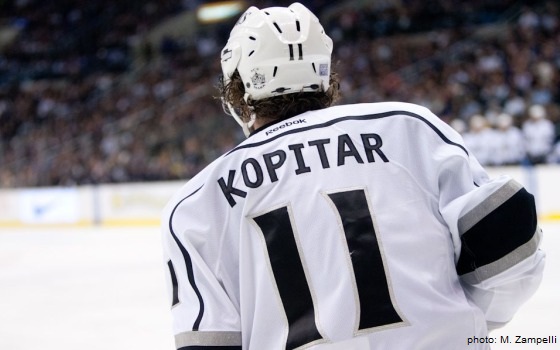 Although he’s about to complete his sixth full season in the NHL, it’s an important fact to remember.

Drafted in the first round by the Kings in 2005 – and signed to a long-term, big money contract after only two years of pro hockey in North America – pressure and expectations come with the territory.

Yet recently, there’s been extra heat heaved in Kopitar’s direction. First, coach Darryl Sutter called him out last month, saying he wants his big center to be a ‘more determined and purposed player.’ Then, in an exclusive interview on MayorsManor just last week, Hall of Famer Marcel Dionne – he of 731 goals scored in the NHL – claimed LA’s points leader needed ‘a wake-up call.’

“Could it be better? Absolutely,” replied Kopitar when I asked for his response to the criticisms and a personal evaluation of his game at the moment.

“I always take pride in being better everyday and working on things. Yeah, I do feel I can put a little more into my game. It hasn’t been (recently) where it’s been at times (in the past). I know I can dominate games and lead the team by example, definitely. It’s just a matter of doing it every night. That’s a challenge for me.”

Yes, consistency has been a big part of the issue.

For example, each time he’s scored 30 or more goals in a season, the following year has seen a drop off. Additionally, he’s become notorious for coming out of the gates strong the past few seasons and then dropping off sharply soon thereafter.

Three years ago, he had 14 goals in the first 18 games and netted only two in the next 24. Last year, he scored his 15th goal of the season on December 26th and then produced a single goal over the next 20 games. This season, he had his 10th goal by Thanksgiving – then followed it with one goal in the next 21 games.

Defensively speaking, while many critics were after former teammate Jack Johnson for his poor plus-minus rating, Kopitar has shown quite a turnaround in that area.

Over his first three years in the league, Kopitar was a combined minus-44, with the stat getting worse – not better – each season. Then, after a plus-6 rating in 2009-10, he posted a stellar plus-25 last year – leading many to see him as a future Selke Trophy candidate (the NHL’s annual award given to the forward who ‘best excels in the defensive aspects of the game’).

Kopitar’s offensive abilities, his defensive prowess, the size, the strength – they begged the question, exactly what type of player does he aspire to be?

“I don’t know,” said Kopitar, pondering his answer for a moment. “I don’t think it’s really based on individual performance. Obviously, I want to win in this league and that’s what I want to be known for, is making key plays at key times and big plays and scoring big goals. If it’s the 25th or the 35th (goal), it doesn’t really matter.  As long as we play up to our potential and are winning games, that’s going to make me a better player and be known around the league for that.”

Dionne came at him with pointed comments, namely saying Kopitar had a decision to make – did he want to be more like Evgeni Malkin (who can dominate games) or Mats Sundin (a solid, two-way center, but somebody Dionne described as ‘not aggressive enough’ when he was close to the net).

So, does Kopitar care about any of the comments made over the last few weeks by Sutter, Dionne and several others?

“It’s not that I don’t care, but I try not to let it affect me,” he began. “There’s a lot of guys around the league. Some guys like you, some guys don’t like you. Some guys make comments like that, the other guys make (more favorable) comments. I think if every player, not just me, read all of the things written and cared or got frustrated with all the comments, I don’t think it would be very good psychologically for anybody. So, you think about it for a little bit. But, you have to get it out of the way real quick because if it affects you for too long, I don’t think it’s going to (turn out) too well.”

To bring things full circle, we can go back to a quote from GM Dean Lombardi at the time of signing Kopitar to his new seven-year contract. In part, he said, “The commitment Kopitar has shown at a young age should continue to improve and elevate his teammates and the franchise.”

Has he improved? Yes.

Perhaps. But, not to the ultimate prize, the Stanley Cup. It’s something Steve Yzerman didn’t do until he was 30 years old. Joe Sakic won his first Cup two months shy of his 27th birthday.

Kopitar is only 24. A number equally important to any other statistic used to evaluate his performance up until this point.

However, if he’s the guy to elevate his teammates – and more importantly, elevate the franchise – to new heights, it’s going to require more than what he’s shown so far.

Kopitar training in one of Europe’s most beautiful cities

Kings GM Lombardi – ‘Kopitar may be the new Blake Griffin’