You are here: Home / NHL / Blue Jackets / Why the LA Kings should trade for Jeff Carter, not Rick Nash 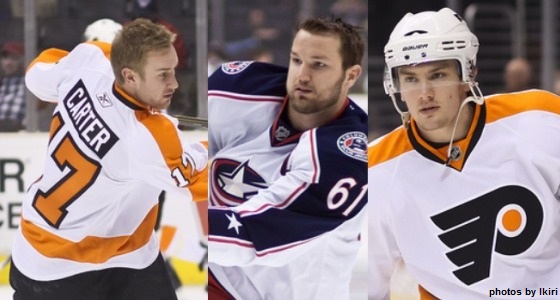 To properly understand the argument that the LA Kings should trade for Jeff Carter over Rick Nash, first requires an open mind. Second, fans of any of the players mentioned below are encouraged to follow along using more of their minds and less of their hearts. This isn’t about who is a nicer guy, which player is a fan favorite or anything else. This is about cold, hard distribution of company assets.

Conventional wisdom is that the Kings’ two best trade chips from their current NHL roster would be Jack Johnson and Jonathan Bernier (trading either comes with its own risk, as reviewed previously in an article here). That’s not saying either guy needs to be traded.  It simply means to get something of value, they need to give up something of value.  Both players are hot commodities around the league – so, it’s a compliment to who and what they are.

To get Nash out of Columbus, it’s believed the Kings would have to give up both players, plus possibly Dustin Brown and another draft pick or prospect. That’s a huge gamble on one player and would the Kings really be better off for it? They will have lost one of their best defensemen – arguably, their best defenseman this season – plus a top-six forward and added only one player in return.

Nash supporters will argue he isn’t ‘only’ a player, he’s a superstar (or at the very least a superstar in waiting). Yes, he’s averaged 35 goals per year over the last seven seasons. And, yes, he’s been able to do much of that without having linemates nearly as talented as somebody like Anze Kopitar.

However, nabbing the best guy from the worst team has long been one of the riskiest trades in sports. Stats are inflated in those environments. Guys are rarely, if ever, able to duplicate those numbers after moving to higher echelon teams.

When a player has performed well on a strong team, even a championship team, he is much more likely to achieve similar success in the future. Why do you think ‘previous championship experience’ is valued so highly at the trade deadline? Having been there, done that and performed under that type of stress shows that a player can excel under even the most difficult circumstances – not just when they’re playing with house money, in last place and are out there free-wheeling it with little-to-nothing to lose.

Enter Jeff Carter. He’s averaged 36 goals over the last four years. More importantly, he did it in the pressure cooker of Philadelphia – one of the most demanding sports towns you’ll find in North America.

To be fair, while Nash has never been to the Stanley Cup Finals (where Carter and the Flyers were just a few seasons ago), he has performed at the international level.  Perhaps, that’s not really a fair comparison though. Those are compressed situations (i.e. short tournaments) and don’t always provide the complete picture of what a player brings over a full season.

OK – so, both potential acquisitions are 27 years old, signed to long-term contracts and capable of putting up points. Carter comes with ‘baggage’ and has done nothing but continually erode his image since arriving in Columbus less than a year ago.  On the other hand, Nash is squeaky clean.

And that’s exactly why the Kings are better off getting Carter.

Simple, the Kings can acquire Carter for much less than Nash.

Would they be taking a gamble on him, yes? Will he rebound from his current state, where he seems to be floating through Blue Jackets games on a nightly basis? Don’t know. Is he a locker room cancer? Don’t know.

But, as discussed above, Nash comes with question marks too.

So, take a risk on Carter because he’ll cost you less…and you have one more ace up your sleeve – Mike Richards.

When the former Flyers captain first arrived in Los Angeles last June, GM Dean Lombardi went out of his way to praise the type of guy Richards is and didn’t want to put much weight on any bad or questionable stories some people were bringing up.  Lombardi lauded him as a winner and strong character guy.

Carter is Richards’ best friend – they’re so close, they still talk three to four times a week right now.  If anybody can keep Carter on the straight and narrow, it’s going to be Richards.

Besides, how much motivation would Carter really need to return to his previous form in LA? He can score goals like he did in Philadelphia and possibly return to the Stanley Cup Finals. Or, he can stay in Columbus, where scoring goals gets him what – a last place banner?

Yet, there’s one more reason why Carter makes more sense than Nash. Remember, to get the Blue Jackets’ captain, the Kings will most likely have to move Johnson AND Bernier. A deal for Carter wouldn’t have to include Johnson.

Theoretically, this leaves him available to move in a deal to the Flyers for James van Riemsdyk – a 22-year-old goal scoring left wing, something the Kings desperately need.

The net result of Carter and JVR is two top-six forwards, instead of one, for basically the same package of players.  Thus, the Kings are making better use of what they have to work with. Taking a comparable collection of assets and getting more back in return is just smarter business.

Lombardi would also be hedging his bet (of trading Johnson and Bernier) a little this way too. Remember, there’s no guarantee that Nash would put up huge numbers in LA. He might, but for every player who was traded to LA and succeeded we could probably name 10 others who have arrived and failed.

From that standpoint, trading Johnson and Bernier could be the wrong move all together. The team might be better served to add a few depth forwards for now and take their chances, thus, keeping a rock solid defense together. Then, trade Bernier later this summer, only after Jonathan Quick is locked up to a long-term contract.

However, if they’re going to roll the dice and go for it now, would you rather take your chances with one lottery ticket or two?

Kings locker room is tense because of all the trade rumors, per Doughty