You are here: Home / AHL / Oscar Moller and Bud Holloway getting tricky on the ice

Well, before we get to the crazy video and picture below, first let’s set the table…

Moller was selected by the Kings in the second round of the 2007 NHL Draft and the 5-foot-10 forward has played 87 games with the big club. Holloway, a left wing, was taken the year before in the third round. He’s yet to get a sniff in the NHL, even though he led Manchester (AHL) in points each of the last two seasons.

The offensive minded duo took their talents to Sweden this season, a move that irked Kings GM Dean Lombardi – just read his full comments on the matter here.

Holloway is a few weeks away from his 24th birthday. Yet, how close we are to his NHL debut may be something still up for discussion. He’s currently leading Skelleftea with 37 points through 45 games and is fifth in league scoring.

In a recent interview, Holloway described his situation in Europe as “A high-paced league with more puck possession and speed. And playing against that speed and skill every night helps a player develop.”  Still disappointed the Kings never called him up last year, while performing so well in Manchester, he later added – “You’d think that deserves a shot, but you never know what the parent club is thinking or what their plans are.”

Moller has 24 points in 44 games played there this season. Both would be eligible to return to the U.S. once their current season is over. Note: the regular season ends on March 6, with the playoffs beginning a few days later. Skelleftea sits in second place, just two points out of first.

If nothing else, the pair could return stateside to perform some entertaining tricks during intermission. Check out this nice catch made by Moller (#45) on a flip-up from Holloway…

Or, ask yourself – just how did Moller do this recently… that’s his stick and glove, but where’s the rest of him? 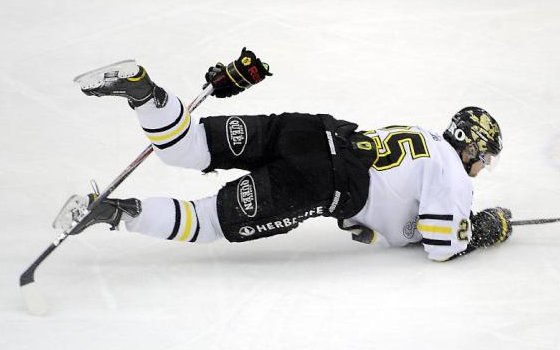 For more on Holloway and Moller, check out the links below.

Interview with Manchester’s ‘Man of the Year’ – Bud Holloway