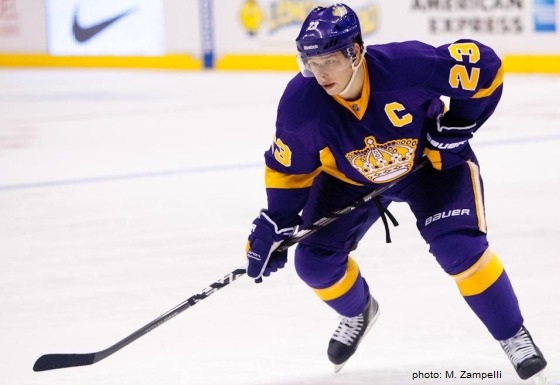 Dustin Brown has averaged 27 goals per season over the last four years, he’s always near the top of the league in hits (currently second) and has a very favorable contract, including a cap hit of $3.175 million per season.

Who wouldn’t want that guy on their team? So, of course, teams are interested in him.

But, when Bob McKenzie – the gold standard for NHL Insiders – mentions the Kings are looking to deal him, people stand up and take notice. That’s the ‘other’ news in LA at the moment.

During last night’s conference call with GM Dean Lombardi, he said “Right now, I have absolutely nothing,” when asked about the possibility of additional trades following the acquisition of Jeff Carter.

Still, after practice today, I spoke with Brown about the latest hysteria. Although there was a throng of media on hand today to speak with the players, including Brown, I paitently waited. And once the herd of cameras, microphones and others were gone – alone in his stall, we had the following conversation…

MM: What do you make of all the rumors that are out there?

DB: I can’t say I don’t think about them. There’s no sense in dwelling over it though. It’s one of those things, it’s part of the business. There are a lot rumors out there that are true, there’s a lot of rumors out there that aren’t true. There’s a lot of stuff that goes on behind the scenes that a lot of people don’t see. As a player, I just try to concern myself with being a better player, especially considering the huge game we have prior to the deadline. We need two points. As one of the leaders on this team, it’s my responsibility to be ready to play.

MM: Guys react to being part of the rumor mill differently. Some guys get angry, some get hurt. What’s your reaction to the things being said in the last twenty four hours about you possibly being on the move?

DB: I can’t really give you one word, it’s probably a mix of a lot of emotions. I’ve been here for a pretty long time. I don’t know any other NHL team. So, when you hear your name out there, it hurts a little bit. But, at the same time, you understand that as a player, you’re just a piece of the puzzle. And it’s a matter of whether you fit or not.

MM: Have you spoken to Lombardi at all about the situation? If so, what did you say?

DB: Nothing. I’m sure they’re doing their job at this point of the year to try and make this team better. I’m not going to go up there with my problems. I’m man enough to deal with what’s on my plate and worrying about myself.

MM: Will the addition of Carter be an instant shot in the arm tomorrow night vs. Chicago or is the trade deadline going to continue to be a distraction for everybody until it’s done and over with?

DB: When you make a trade like that, for a marquee player, guys are excited about it. Losing a piece like Jack, you always have to give up something good to get something in return. We needed some goal scoring and Jeff will definitely help with that. It’s one of those things where once he’s cleared to go [Carter is still pending a physical tomorrow morning], I think everybody else is pretty excited about the situation.

As stated many times on twitter, radio appearances, even here on MayorsManor – if I was an NHL GM, Brown could be my captain any day of the week and twice on Sunday.  He’s the type of player every franchise needs more of, not fewer.

He’s worn a letter for Team USA at multiple international tournaments and he’s one of the most well respected players around the league.  The Kings should be figuring out ways to clone him, not trade him.

Coyotes coach Dave Tippett – a highly respected man himself – was on MayorsManor just last week with some high praise for the Kings captain (link).   Going back two years ago, Pierre LeBrun of ESPN/TSN joined us for a season preview and said he’d rank Brown ahead of Shane Doan and Brenden Morrow (link) – considered two of the elite captains in the league.

For all the reasons stated throughout this article, there is no way the Kings can afford to trade him. His contract, the points, the hits, the work in the community – it’s too valuable. Unless you’re getting TWO high-end forwards in return, it’s not even plausible. For a player and a draft pick? Come on, be real. For a defenseman like Luke Schenn? Whatever the word is for ‘more than ridiculous,’ that’s it.

My prediction, Dustin Brown will be in Minnesota the day after the NHL Trade Deadline.

Check the Kings schedule if don’t already know why.

Dustin Brown on why his hit totals are down 24%