You are here: Home / AHL / Nolan, King up and Voynov, Stoll out for LA Kings 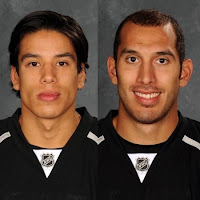 Slava Voynov is on his way back to Manchester. It’s an easy move to understand, as the team was carrying an extra defenseman and it seems that coach Darryl Sutter has settled on Alec Martinez. Thus, it was time for Voynov to head back to the AHL, where he can play large minutes every night and continue his development.

Jarret Stoll was also placed on injured reserve with the ever-popular ‘lower body injury.’ No timetable has been set for his return.

And then there’s this – forwards Jordan Nolan and Dwight King were called up from Manchester. In a nutshell, they’re two of the Monarchs leading point producers and the two biggest forwards not named Ray Kaunisto. At 6-foot-3, both are just an inch shy of twitter phenom-to-be RayK71.

Speaking of 71, that’s the number Nolan will wear when he makes his NHL debut tomorrow vs. the Islanders. King will wear #74, the same jersey he sported during his six-game NHL stint last season.

King, originally selected in the fourth round of the 2007 NHL Draft, had posted 11 goals, 18 assists 20 penalty minutes and a plus-6 rating over 50 games with Manchester this season.

Nolan, a seventh round selection at the 2009 NHL Draft, has probably been the Monarchs most improved player this season – with nine goals, 13 assists and 119 PIM. Both players also spent a little bit of time with the Ontario Reign (ECHL) after first turning pro.

At practice today, they skated on the second line with Mike Richards. However, that may or may not be the plan for tomorrow’s game. We shall see.

Missing out on all the fun was Brandon Kozun. The 5-foot-8 right wing was very impressive during the team’s Rookie Camp in September and has been consistently tallying points lately, after getting off to a slow start. His game is about speed and creativity. Plus, he recored 108 and 107-point seasons his final two years in the WHL. So, at some point, you have to figure he’s going to get a look. Just not this week.

For more on all the players listed above, please see the links below.

Terry Murray on Kozun being cut from training camp

Alec Martinez loves Sutter, even when he scratches him