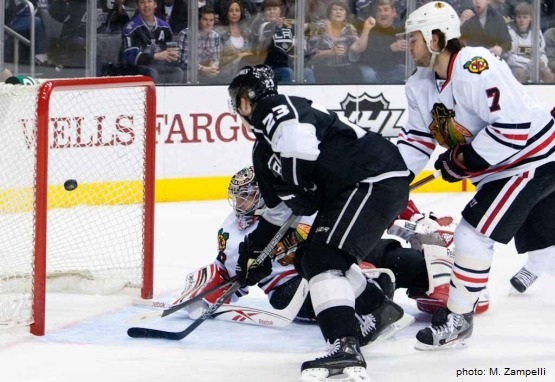 Imagine if your dream was to play in the NHL. So, at the age of 15 you move away from home – and across the border to Canada – so you can further your skills. A few years later, you’re drafted in the first round by a team 2,700 miles away and on the other side of North America. After spending a year in the minors during the NHL lockout, you become a full-time player.

So far, it’s a story that’s probably similar to many players around the league. Now, add in that in 2007 you commit to your organization by signing a six-year contract, wanting to be part of what they’re building. And the following year, you earn the team’s captaincy.

Yet, four years later, you hear your name come up in trade rumors. Yes, it’s a business. But, as Dustin Brown told us in an exclusive one-on-one interview on Friday, he was hurt by some of the things being talked about.

Growing up, kids are taught that actions speak louder than words. For Brown, he added an exclamation point to the statement by responding to everything he heard with one of his best games as a King – scoring three beautiful goals, including the final one short-handed, giving him a natural hat trick.

Back in the locker room, we chatted again…

Brown on any feelings of redemption stirred up by his performance – “It just felt good to score goals. I think collectively, as a team, it feels good when we get a lot of goals and personally, I’m not having the best offensive year – the year I’d like…It’s definitely something you think about when you’re name is out there. I don’t think it’s a motivating factor, but it’s definitely in the back of your mind. Maybe it’s coincidence, I guess.”

On what he saw from new teammate Jeff Carter in his first game as a King – “He had a couple of really good chances. He’s big and fast. That’s going to be a key (for us), another big body and he can really shoot the puck. With Ricky [Mike Richards] finding him more often, as we start to play a few more games here, I think he’ll start to score a lot of goals for us…It’s always exciting when you get a marque player like Jeff. Everyone’s well aware of what he’s capable of, he’s had a pretty good and consistent track record. Plus, I’ve known him since we were probably 15 (years old) playing in juniors. So, I think guys were excited (to add him) as a piece of the puzzle.”

On Jarret Stoll playing his best game in a long-time, finishing with three assists (tying his career high) – “Hockey’s a funny game with confidence, it comes and goes. With Stolly, he’s been one of those guys who goes and plays, whether he’s on the wing or center, or third line or second line – he just goes out and plays. He got into a groove tonight. A lot of guys would probably bitch and complain about the type of year he’s had and what he’s had to put up with. But, he just comes to the rink and works.”

To watch highlights from the game and Brown’s hat trick, click here.  The article also includes his selection for which of the three goals was his favorite and why.

Doughty on the Kings trading Jack Jonson to Columbus