You are here: Home / comments / Kevin Westgarth on what goes into preparing for a scrap 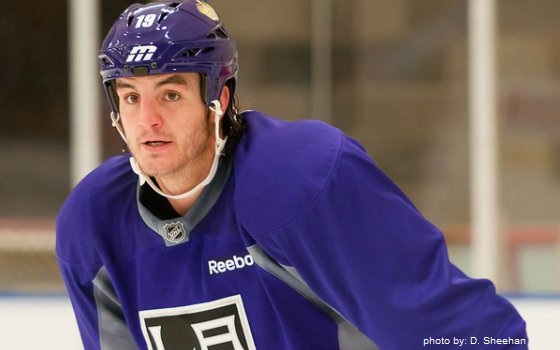 As sometimes happens when you sit down with Kevin Westgarth, the conversation can drift. His insightful answers to questions on topic A can quickly lead to you asking about topics B, C and D. Such was the case recently when we began talking about something as simple as taping his wrists.

“I do a light tape,” began Westgarth, who is celebrating his 28th birthday today. “Even for the game, it kind of solidifies your grip and your wrists. A lot of guys I’ve run into have either hand or wrist problems. So, in some sense I’m sure it’s probably placebo, but I’m sure there’s something to it. It keeps things a little tighter and makes you a little more solid.”

Not everybody agrees with him, per se. “I’ve never taped my wrists,” said Kyle Clifford. “But, I’m not throwing heavyweight punches like him. So, it’s kind of different.”

There isn’t a guide to follow when it comes to preparing for a game – and the possibility of a fight – says Westgarth, “It’s mostly trial and error. In Manch (Manchester, AHL), I was the heavyweight. So, it was a lot of blazing my own trail. But, I tried to learn as much as I could, even from watching guys on other teams that I respected. There was some help from a few of the older guys. But, they weren’t as into it as maybe I have to be. In the summers I also try to talk to different guys that I’m training with or just run into. Marty (McSorley), here, is a great resource too.”

Earlier this season, McSorley was on MayorsManor and talked about helping guys with their balance, is it that something he’s been able to work with Westgarth on?

“It’s definitely something we’ve touched on. Balance has been a focus of mine, just skating regularly,” he said with a laugh. “Also, in a fight, it’s paramount to success. If you’re (down) on the ice, you’re not doing very well in a fight.”

Westgarth also credits the team’s new strength and conditioning coach, Ryan van Asten, for helping him build his core strength. The Kings recently brought on van Asten to replace the departed Tim Adams. He previously worked with Hockey Canada and at the Canadian Sport Centre in Calgary.

Westgarth doesn’t limit his preparation to the training room though. “It’s like anything in my life, I just try to get information and knowledge from everywhere,” he shared. “That’s paid dividends for me in many facets of my life.”

Another type of tape is becoming part of the preparation of tough guys around the league as well. For example, New Jersey’s Cam Janssen once told us he used hockeyfights.com to research several LA Kings players.

“Some guys are diehards about it,” said Westgarth. “I’ve studied a few guys. But, one of the things I’ve always found is, you have to believe in your own strengths. Obviously, if you can catch something they’re particularly weak in, you can take advantage of it. But, I tend to think, for me, go with your strength against whatever they’re going to bring. So, it’s that confidence that’s going to win you the fight.”

Even so, he’s still willing to take some help along the way. “My brother will sometimes scout guys out and give me info on a team we’re about to meet up with. He played in the AHL for a few years and he knows his stuff too. So, it’s nice to have a bit of a network to help me out.”

Confidence, family and a little bit of tape. Each plays a part in what ultimately leads to a post-fight clap and Westgarth skating off to the penalty box for five minutes.