You are here: Home / hockey / Jonathan Quick not getting much support, even on off day 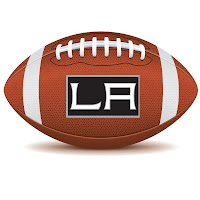 While Canadians proudly proclaim hockey is their sport, few things are as American as the Super Bowl. Whether you’re gathering with friends today to watch the game, the commercials or just eat a bunch of food, the game has nearly turned into a national holiday. Football fan or not, it’s hard to escape the hype surrounding the biggest sporting event of the year. So, who are the Kings favoring today…

Drew Doughty – “I want the Pats to win. I kind of have a few things going with some of the guys on the team. Quickie is a big Giants fan. So, I have to make sure I’m able to rub that in.”

Jack Johnson – “Patriots. I think Eli (Manning) is great, I like him. Yet, when push comes to shove, I have a hard time betting against Tom Brady. I hope it’s not a low scoring game though. I’d like to see a little bit of a shootout, that makes things more interesting.”

Matt Greene – “Patriots. The total points in the game will be 67.”

Rob Scuderi thinks it going to be a high scoring game too – “I’ll take the Patriots. I don’t care about the score, as long as it ends up to 57 (total points) or over.”

So, three guys from one of the stingiest defenses in the National Hockey League are looking for an offensive explosion in the Super Bowl?

Fine, how about the forwards – what do they think?

Jarret Stoll, Patriots…Trevor Lewis, Patriots…Kevin Westgarth, Patriots. Is there some sort of conspiracy going against Quick? Or is there any logic built into these predictions?

Kyle Clifford – “Patriots, that’s about as far as I’ll go. I just think New England is going to win. I don’t know anything else about the game.”

Justin Williams – “Patriots. But, I’m rooting more for a good game. I like to be entertained.”

Anze Kopitar – “Those are two really good teams and it’s going to be a good rematch from a few years ago. So, it should be fun. I think I’d like the Pats to win. Just to get a little revenge. But, I’m not going to be cheering too loud for either one.”

Interesting, the two guys from New York – Brown and Scuderi – are both took the Pats. What gives?

“Growing up, I hated the Bills, hated the Rangers,” said Brown. “I hated all New York teams really – except for the Yankees. And I liked them when they sucked, just because Don Mattingly was my favorite player. I was a 49ers fan back then. My older cousins grew up in Northern California and they were 49ers fans, so then I became a 49ers fan.”

How about the coach, who does Darryl Sutter like in today’s big game? He’s going with the Patriots because, well, he likes their coach. Go figure.

So, just like most Kings games, Quick isn’t getting much help from his teammates. The whole room is going with the Pats.

Oh wait, this just in…Mike Richards thumbed out a tweet this morning – “Who does everyone have tonight? #SuperBowl #gogiants”

Finally, Quick has some back-up. Will it be enough?

If it’s anything like his life on the ice, expect a close, low scoring game that won’t be decided until late – possibly in overtime.

Results for Jack Johnson and Dustin Penner vs. The Mayor

What I’ve learned so far this season… by Brad Richardson