You are here: Home / comments / Westgarth and Clifford talk aftermath of the Gordie trick 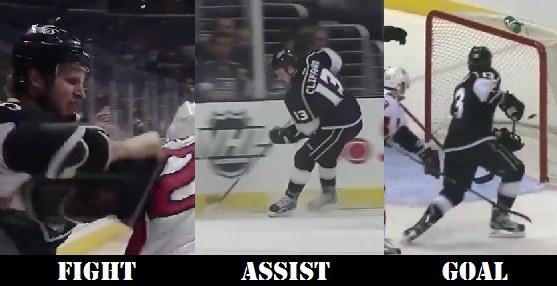 Sometimes you get lucky.

Back in November 2010, sitting in the locker room in El Segundo, after some otherwise meaningless weekday practice, Kevin Westgarth and I were chatting about his rookie season in the NHL. Down the aisle about five stalls away was the only other player there at the time – Kyle Clifford.

During one of Westgarth’s many stories, the usually quiet Clifford piped up and offered a challenge. The first one to get a Gordie Howe hat trick would owe the other dinner. Westgarth was more than willing to accept and suggested they would celebrate when their girlfriends were in town. No problem, both sides agreed and a deal was born.

After Clifford turned the trick last night – getting a goal, assist and fight in the same game – Westgarth laughed when reminded of the other little known detail from that original conversation.

Looking to extend the future double date to include some post-meal entertainment, Westgarth had suggested they make the reward dinner and a movie, to which Clifford replied with simply one word – ‘No.’

In the locker room last night, Westgarth laughed when reminded of the bet being dinner only. As for what took place on the ice vs. the Senators, “If anybody else had to do it (before me), he’d be my second choice,” said the Princeton grad. “It’s going to be a nice little dinner. I don’t feel too bad buying him that one at all. That was a hell of a game by Kyle Clifford right there, it’s great to see.”

Then, upon further reflection, Westgarth offered his theory on why Clifford may have turned down the added movie option – “He must have thought I have a better scoring touch than I do.”

Clifford, on the other hand, was already thinking ahead to the steak he’ll soon be eating, “I once did a 52-ounce (porterhouse). So, we’ll see if I can top that.”

Humble as always, he sort of sounded like the loser of a bet rather than the winner, when he added – “It’s almost like a sigh of relief because it’s been two years now. We’ve been struggling with it. Let’s get the monkey off our back and now we’re just going to keep moving forward.”

His night started off with a fight against the Senators’ Zenon Konopka less than three minutes into the game. It was a rematch of their scrap from last season, when Konopka was with the New York Islanders.

Then came the assist, about 12 minutes later, when he set up Willie Mitchell’s goal. And in typical Clifford fashion, he was quick to give praise to many of his teammates – “(Johnson and Doughty) do a great job back there. As far as Mitchie, Scuds, Greener, Slava, Whiskey and Marty, they do a great job as well. All eight of our D have chipped in at one time or another. So, it’s a good group back there.”

Finally, the crown jewel. Clifford picked up a rebound in the crease, just past the midway point of the second period, and it stood as the game winning goal – his only other one in the NHL came last year during the playoffs.

“We’ve had chances all year around the net,” he said of his line’s recent play. “Now, we’re getting that bounce and we’re really bearing down. Our will to score is really paying off.”

Clifford couldn’t recall if that was his first-ever Gordie Howe hat trick. He said he’d have to look up his OHL stats today.

We can report, upon further review, he did in fact have one Gordie while playing his junior hockey with the Barrie Colts. It came on March 4, 2010 vs. Belleville.

What I’ve learned so far this season… by Kevin Westgarth