You are here: Home / hockey / Matt Greene’s New Year’s Resolutions for his teammates 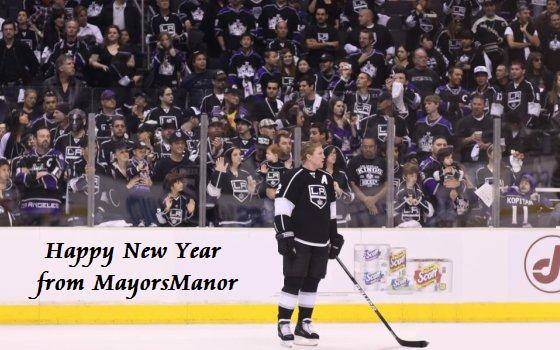 Yes, it’s January 1st, which means it’s time for a New Year’s article. Only this time, instead of hearing about what somebody hopes to accomplish or change in the coming year, we have one of the Kings’ players sharing some resolutions for his teammates.

Kevin Westgarth started the tradition on MayorsManor last year and it seemed like a good idea to give it another whirl. So, here are some New Year’s Resolutions Matt Greene offers up to his fellow LA Kings…

Dustin Brown – Tip in a couple of Jack’s shots (Johnson, sitting in the stall nearby, jokingly added, ‘Yeah, instead of blocking them!’)

Kyle Clifford – Get harder, you’re getting soft off the ice.

Willie Mitchell – Be more vocal, talk a little bit more and make sure everybody knows what’s on your mind.

Andrei Loktionov and Slava Voynov – Hang out and become a little tighter with each other. Right now, they’re always spread out. One is never in the same room as the other one. They should embrace their heritage and spend a little more time together.

Jarret Stoll – Pick up your style a little bit

Since he brought up style, I had to ask for his opinion on coach Darryl Sutter‘s style so far – especially on the last road trip…

“Darryl looks good out there. He’s making it work,” said Greene.  Further proving that while he just might be the funniest guy on the team, #2 still has no sense of style.

Fortunately for Greene and Sutter though – according to most on the team – Scuderi already has the ‘Worst Dressed’ title locked up for the entire season.

For more humor from inside the Kings locker room, check out some of the links posted below.

Mike Richards and Willie Mitchell talk about their bromance

LA Kings players look at the funny side of traveling to Europe – best/worst dressed, etc.

What I’ve learned so far… by Brad Richardson