You are here: Home / NHL / Avalanche / LA’s Jack Johnson on the ‘creative and unpredictable’ Avs 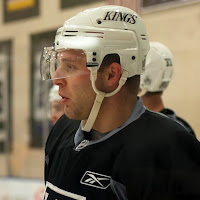 Earlier today we posted comments from coach Darryl Sutter, who pointed out the Kings have out shot the Avs by a wide margin this season, but have lost both games. Tonight marks game three of the four-game season series.

In sharp contrast to Brad Richardson – who seems to love playing against his former team – Jack Johnson has only recorded points in one home game vs Colorado in his career (two assists on February 13, 2010).

Prior to tonight’s contest I asked him if the speed of the Avs was their number one asset?

“I don’t know if that really pops in my head. They’re a team that for some reason, they’ve been a tough team for us this year. I think they have some talented young forwards, for sure. I think that’s the strength of their team – their young forwards up front. They’re creative and unpredictable, that makes for some dangerous moments in a hockey game.

Now, a few weeks ago Dustin Brown correctly picked Drew Doughty to score the first goal of the game vs. Phoenix. Who does Johnson think will light the lamp first tonight for LA?

If you want to get in on the MayorsManor First Goal Contest, be sure to leave a comment below or post something on the official facebook/twitter links that will go up about 30 minutes before game time. One random winner from all entries received tonight will win a free pair of tickets to Monday’s game vs. the Senators.

In the meantime, to read more about Brad Richardson – the human avalanche – click here.